Continued growth in number of employed persons in Feb 2022: DOSM 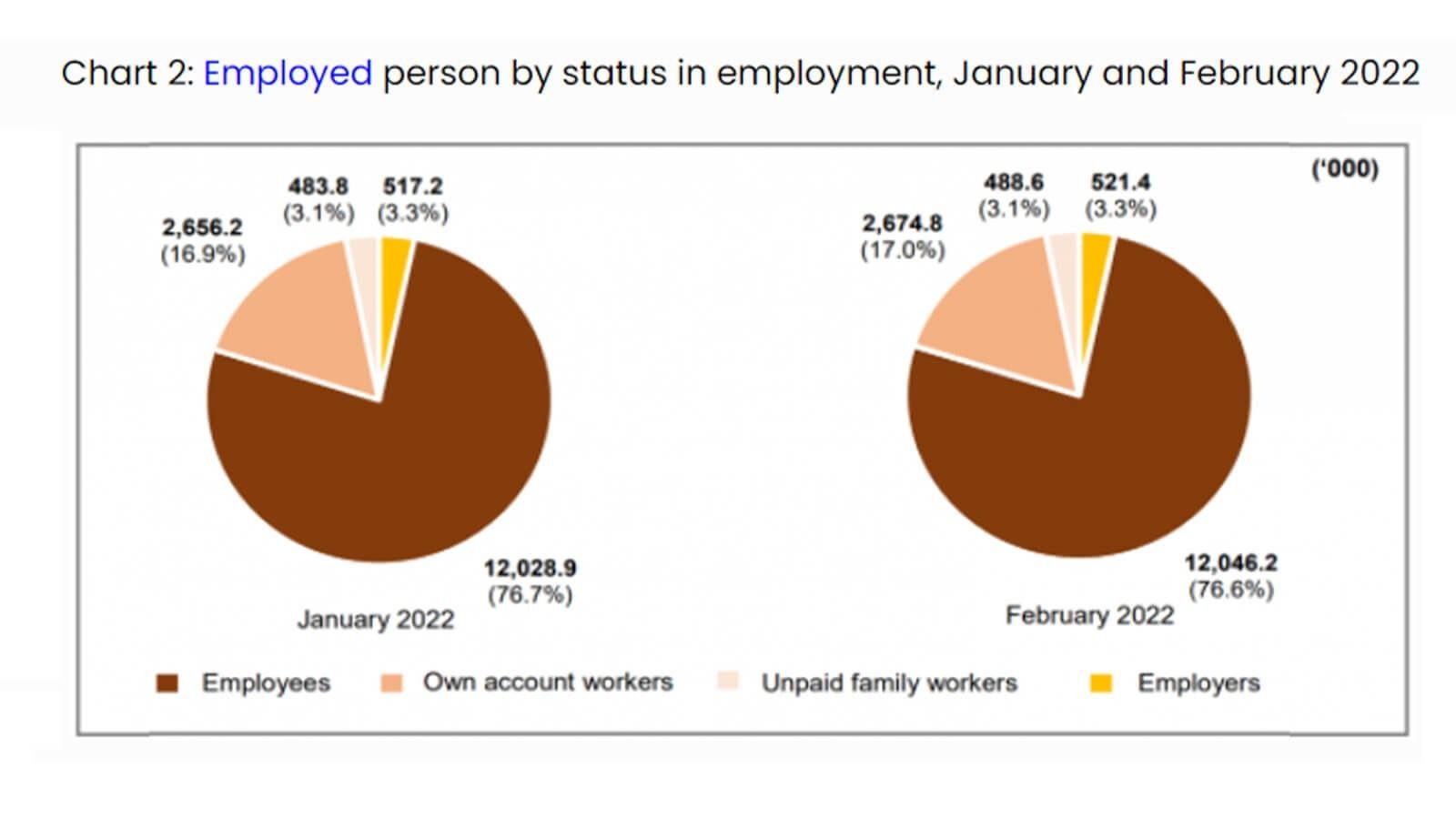 At the same time, Malaysia also observed a further decline of 1.3% (or 8,600 persons), in the number of unemployed persons in February 2022.

In contrast, agriculture and mining & quarrying sectors continued to record a reduction in the number of employed persons.

A similar trend was observed in the own-account workers' category which maintained its growth with an addition of 0.7% (+18,600 persons) to register 2.67mn persons (January 2022: 2.66mn persons). This category consists mostly of daily income earners working as small business operators such as retailers; hawkers; sellers in markets and stalls; as well as smallholders.

During the month, the number of employed persons who were temporarily not working continued to decline, with a reduction of 4,500 persons. Through this 4.8% decline, the number of persons dropped to 89,000 persons from 93,500 persons in January 2022. Year-on-year, this category remained its decline with a decrease of 61,800 persons. In February 2021, it was noted at 150,800 persons. This group of persons, who were most likely not able to work, were not categorised as unemployed as they had work to return to.

By unemployment category, those actively unemployed or those who were available for work and were actively seeking jobs comprised 83.7% of the total unemployed persons. The number in this category reduced by 1.2% (-7,000 thousand persons) to record 562,500 persons (January 2022: 569,500 persons).

Those unemployed for less than three months encompassed 56.7% of the total actively unemployed, while those who were in long-term unemployment of more than a year made up a share of 7.3%. On the other hand, those who believed that there were no jobs available or were inactively unemployed dipped by 1.4% (-1,600 persons) to 109,300 persons (January 2022: 110,900 persons).

A total of 322,177 employers benefitted from wage subsidies as of 18 March

Apart from the above, DOSM shared that to aid employers in ensuring employees are able to retain their jobs, the Wage Subsidy Programme (PSU) has benefitted a total of 322,177 employers and 2.64mn registered employees with an approved wage subsidy at RM12.96bn as of 18 March 2022.

Concluding the report, DOSM also shared that, as of 6 April 2022, a total of 79.2% of Malaysia’s population are fully vaccinated, while the adolescent vaccination rate is 97.6%.

"The recovering economic situation in the first two months of 2022 was driven by encouraging economic activity, it added.

Along with Malaysia's transition to an endemic phase, the reopening of the country's borders is also seen as a catalyst to revive the shortage of foreign labour in the country.