Venting vs complaining: Is stress a regular feature of your company culture? If your employees feel overwhelmed, would they approach you or the HR team to share their anxieties? Data shows that most people choose to talk to co-workers, rather than their bosses or HR, about their work-related stress.

"I'm so stressed, there's just so much going on!"

"I can't take this job anymore, it's too much work and I don't have time for myself!"

We're no stranger to exclaiming these or the likes out loud at some point or the other in our work lives. Whether we enjoy our jobs and look forward to it each morning, or we're just dragging our feet to work each day, sometimes the workload can get overwhelming, and we find ourselves having to vent our stress out. But are we encouraged to do so at work, or do we have to keep it in? Are we also comfortable enough to confide in someone?

In a recent survey by Joblist, a majority of respondents (65.2%) said they do feel that they can be open about their stress when at work, while the remaining said they don't (34.8%).

That said, while just by a small margin, more employees still reported that they did not fear negative consequences (52.3%) that may arise if they speak up (e.g. affecting a raise or promotion), compared to those who feared (47.7%). 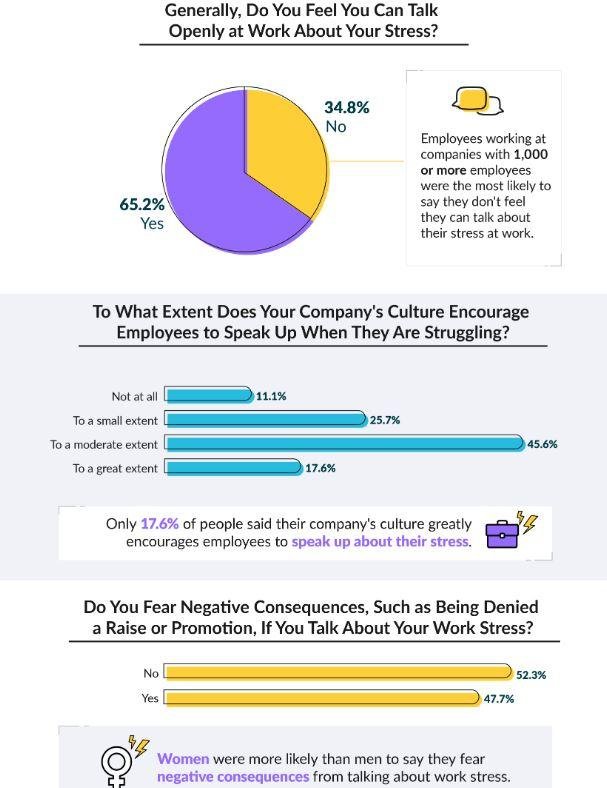 With the above in mind, when exactly does speaking up count as venting, versus complaining, and is there a difference between both?

According to nearly 60% of respondents, there is indeed a difference - while venting is seen as a means to blow off steam/stress, complaining can be seen as a bad thing to do.

However, the survey showed that there "may be a bit of a double standard" in what people view as venting and what they view as complaining.

Above all, how effective is venting at relieving stress? According to nearly 47% of respondents, venting is 'very' or 'extremely' effective at alleviating stress, and 34% said it is 'somewhat' effective. 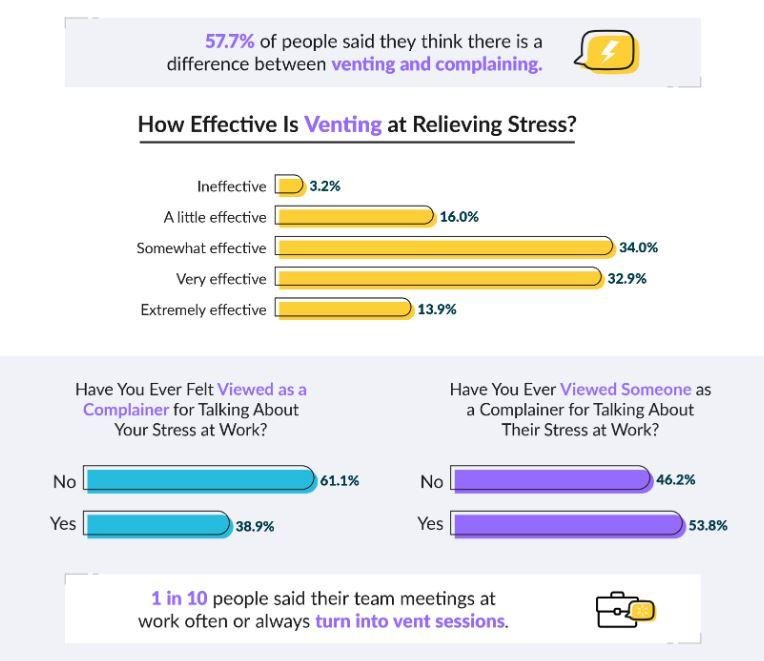 Who do employees turn to as a confidant?

As part of this, respondents were also asked about who they’ve talked to about their work stress. Breaking the responses down by employer size, it found that people working at smaller companies with 24 or fewer employees were the most likely to say they hadn’t talked to anyone about their work-related stress. They were also the least likely to approach HR about it.

Among these cohorts, those with employers who had between 500 and 999 employees were the most likely to talk to a manager or HR about their stress.

interestingly, the likelihood of talking about work stress varied based on if the person worked remotely or in person. People were more likely to say they won’t talk to anyone about their work-related stress when working remotely, despite how remote working has had an impact on stress levels/mental health.

What do you think about having pets at the workplace? 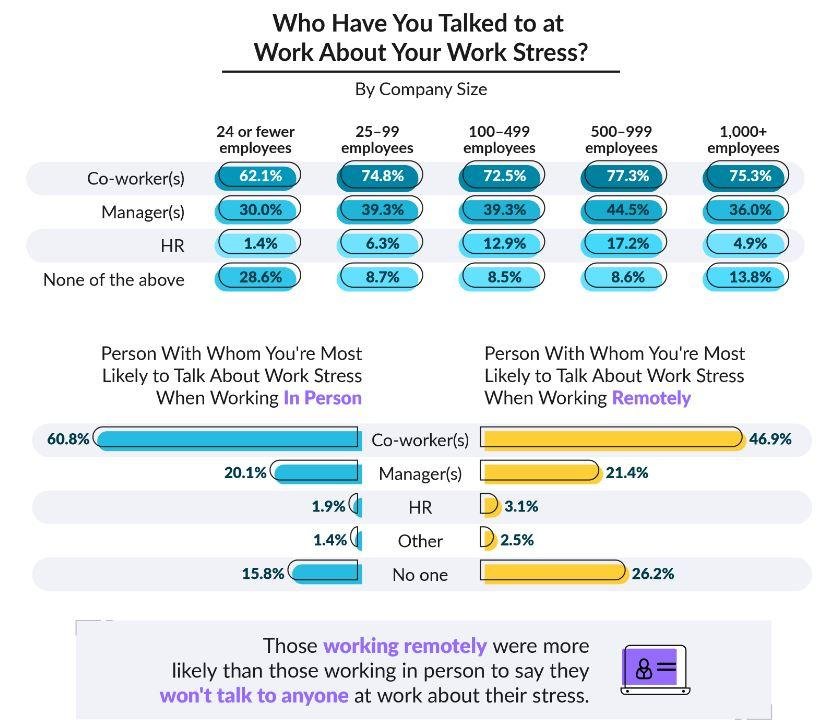 Looking at stress levels relative to job position, the survey found that being a manager slightly reduced the levels of reported stress among respondents. Nearly 75% of non-managers said they experienced moderate or high stress due to work, compared to less than 68% of managers. Managers were also more likely than nonmanagers to report low levels of overall stress.

Employer size was also found to have an impact on stress levels. In particular, employees at the smallest- and largest-sized firms were more likely than those at mid-sized firms to report high levels of overall stress. People working for employers with between 25 and 999 employees were over 20 percentage points (pp) more likely than those at the aforementioned companies to experience moderate levels of overall stress. This, the survey noted, may be in part because the primary factor adding to people’s work-related stress is having a large workload.