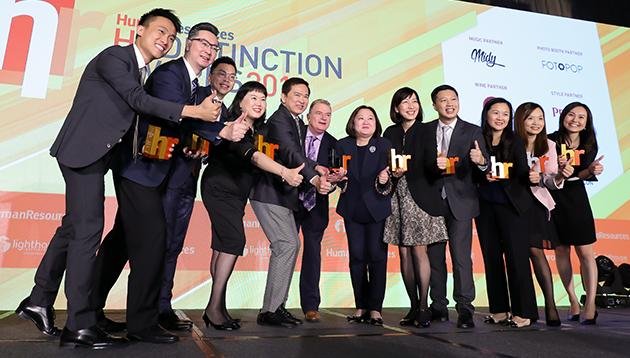 The 2019 HR Distinction Awards in Hong Kong were hailed as a smashing success at the Hotel ICON in Tsim Sha Tsui East.

Those in contention were entertained by emcee and TVB actor Brian Burrell who kicked off the proceedings, and wowed the assembled throng with his fluent Cantonese skills.

Finalists were treated to the Hotel Icon’s five-star cuisine, as Asia’s most outstanding HR organisations and individuals were feted for performing above and beyond the call of duty in people management.

A total of 15 judges across a broad range of human resources and business sectors adjudicated without fear or favour to unearth the deserved winners.

Wendy Yu (senior VP of human resources) and Francis Tan (VP of learning and talent management) from MGM China gave an impromptu red-carpet interview with Human Resources magazine at the close of the awards to share some of the secrets of its success – before the jubilant team headed back to Macau on a late ferry.

LF Logistics was another organisation that excelled at this year’s awards, taking out top gong for HR Rising Team of the Year, HR Strategic Plan and HR Innovative Team of the Year.