Workaholic: The cost of addiction in your workforce 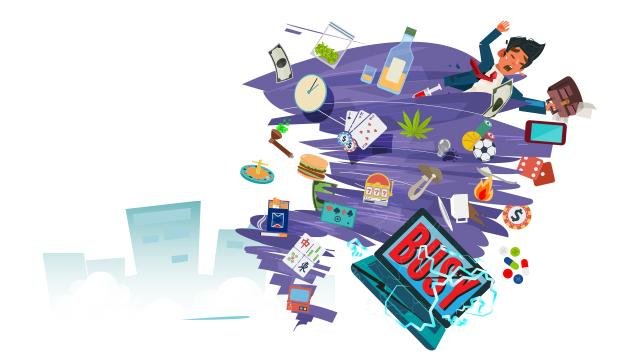 “The cognitive, emotional, and behavioural impairment that results from drug or alcohol use can affect productivity, morale, and even the safety of other coworkers. The cost of addiction in the workforce is usually measured financially, but it can also refer to more subjective losses, which can change the entire nature of an office,” the report states.

While the centre deals specifically with alcohol addiction, there are many other addictions that can have a significant not only in the workplace but on the lives of individuals. Addiction to gambling, sex, recreational drugs and even prescription drugs are also potential blights on the modern workplace, also having a deleterious effect on the lives of employees and colleagues.

Human Resources talks exclusively to Andy Leach, clinical lead for Asia at The Cabin – and a specialist in addiction – to shed light on a problem that often lies hidden in the modern workplace. While based in Thailand, his team also deals with outpatients in Hong Kong and Singapore.

The addiction is immediate, so you can hook up with someone within walking distance of your office within less than five minutes to have anonymous sex.

“When you think about sex addiction, it isn’t just someone going and having lots of sex outside of work. It would be someone who’s sitting obsessing about their ability to connect with people these days with apps on their mobile,” he explains.

“The addiction is immediate, so you can hook up with someone within walking distance of your office within less than five minutes to have anonymous sex. So that’s just one example.”

Leach adds that regardless of whether the addiction is gambling or drugs or alcohol, the person will be obsessing about when they are next going to be able to act out on their addiction, so it’s going to be incredibly distracting from their ability to be able to work properly.

Danger signs for HR
While addiction the workplace can take many forms, there are a number of telltale signs for HR to look out for that all is not right with one of their charges.

“What you will be looking for initially is problems with time management. I think timekeeping would be one of the things that would go out the window fairly rapidly. If it’s alcoholism or drug addiction, personal grooming starts to becomes less and less important. People are late, distracted, productivity is going down,” says Leach.

“They tend to have surreptitious phone calls and overly long lunches – their behaviour can become furtive. If it’s drug addiction, they may say ‘I’m just going to have to pop out for five-to-ten minutes’, then doing it again an hour or two hours later, over many times. You may witness many visits to the bathroom.”

With addiction, timekeeping would be one of the things that would go out the window fairly rapidly.

If something doesn’t seem right with one of your employees, it’s advisable to trust your instincts – even if you can’t quite put your finger on the problem. In addition to the more obvious visual signs of personal appearance and grooming, they may exhibit signs of nervousness or jitteriness. There may even be signs of depression – such as mood changes, irritability, or a sense of hopelessness.

When your suspicions are aroused that something is amiss with an employee, or possibly even if they come to you of their own volition, effective communication is essential.

“What you need to do is to be able to sit down and say something such as: “I’ve noticed that something doesn’t appear to be right. I may be wrong but perhaps something might be going on that you’re struggling with. And would you like to share this with me?” adds Leach.

Dr Scarlett Mattoli, a clinical psychologist with the Psynamo Group, agrees that open lines of communication between HR and employees are crucial to dealing with addictive behaviour that is manifesting itself in the workplace. Opening a longer term dialogue could prove invaluable.

“Frankly, a lot and the best way is to have well connected teams who communicate regularly, know each other’s patterns, feel comfortable enough to share their observations with colleagues when things change and an open and flexible system whereby the individual is informed of warning signs – perhaps though a company-wide education strategy – and can self-refer in confidence early on, prior to things getting out of hand and to the point where time, productivity, money (and) clients are lost,” says Mattoli.

Defining addiction
The word ‘addiction’ is often used to represent over-use and/or uncontrolled use of something or over-activity, for example exercise or mobile phone use. But what is in the gulf between ‘normal’ use and ‘misuse’?

“Drinking coffee, smoking cigarettes, can be done to excess and do have diagnoses associated with them, but few employers notes these as being ‘problems’ that need to be dealt with in the same way as excessive use of drugs, alcohol, and, today, general non-work online activity,” explains Mattoli.

“And some (people) can drink copious amounts of alcohol and remain remarkably coherent,” she adds.

One of the challenges for HR is that sometimes given an employees’ role it may be difficult to tease out what is addictive behaviour and what is simply part of their normal work duties – for example, consuming alcohol when socialising with clients at networking functions.

“Recognising (alcohol addiction) can be hard as some employees are ‘required’ to drink with clients,” points out Mattoli.

The cognitive, emotional and behavioural impairment that results from drug or alcohol use can affect productivity, morale and even the safety of coworkers.

What can HR do?
Being open and empathetic with employees about their addiction is crucial to helping them on the path to overcoming their illness.

“First of all is to provide a safe space, safety and the ability to allow people to communicate in a way that they feel they are not going to be in danger of losing their job. If they are able to be honest, they will get the help that they need,” says Leach from The Cabin.

“In my experience the vast majority of people keep doing what they are doing because they are frightened of being judged. They are scared of the stigma associated with mental health and with addiction. If we can normalise this for people, then they are more likely to seek help.”

Addiction is not something that just suddenly goes away. People do need help or to get through it and ideally get connected to other people in recovery. That might involve them going to a 12-steps meeting, of which there are many available in Hong Kong.

“Maybe there’s something beyond the addiction such as trauma, depression, or anxiety that is feeding the addiction. Inevitably there will be something that leads people to act in this way. This needs exploring with a professional,” adds Leach.

It’s also worth considering that many people are working in high-stress environments and the addiction can be part of how they look to mitigate that stress.

“People are looking for ways to find release and/or relief. So basically, if one can bring some understanding to that without judgment, this then gives people the opportunity to ask for help,” says Leach.