CHROs: How prepared is your team for an economic downturn?

While 98% of CHROs surveyed in APAC see an economic downturn approaching, just 12% of believe their team is well-prepared to respond, the recent Downturn Survey by Russell Reynolds has revealed.

At the same time, two-thirds of these CHROs anticipate this downturn to have a "moderate to significant negative impact' on the organisation's performance.

More importantly, almost all the CHROs surveyed (93%, or about 40 people) lacked confidence that they currently had the right team in place to face this downturn.

CHROs feel talent is the "least ready" in agility and experience

Across the region, the survey looked at areas where organisations have experienced strong growth over the past decades, which have in turn resulted in talent being unprepared for a downturn.

Thus, according to the CHROs interviewed, the volatility and uncertainty brought about by this disruption and downturn would require organisations to be "nimble, empowered to act and quick in their responses."

Talent would need to be open to moving away from legacy structures and processes, in preparation.

Finance, legal and supply chain practices will grow: What about HR?

In addition, the survey found that with every recession, the roles of finance, legal and supply chain practices grow. "Conversely, HR tails off, showing that CEOs do not invest in a strategic and robust HR plan when faced with a downturn.

"The development of HR is low on the CEO agenda, but this could be the very investment that helps an organisation survive through a recession and recover faster than competitors."

That said, the CHROs surveyed believed that despite this, HR still plays an important role in building a strong culture and talent strategy in the organisation.

The CHRO's role in preparing teams for the economic downturn

In light of these findings, what can the CHRO do to ensure their teams are well-prepared for the impending economic downturn?

First, they should start by holding conversations with their senior leadership team to identify the key gaps faced, importantly in agility and a slowing market.

Next, once these gaps have been identified, the CHROs should work closely with the team to address them through effective leadership, relevant talent strategies, as well as by building a conducive culture.

Third, perform a stress test on the team, to assess their capabilities to respond to tough situations and execute contingency plans. Not only would this help identify missing points to tackle, but it will also better equip the team for a real scenario. 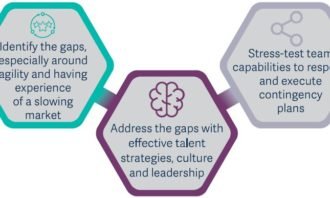