There’s more to safety than physical protection. Organisations need to foster safe environments for communication that empower employees to speak up.

In a study of 12 markets around the world, SHRM identified the state of workplace culture, and the strides that organisations have made in recent years. A sample of 9,464 workers (i.e. paid employees) was surveyed using a third-party online panel. Respondents were from Australia, Brazil, Canada, China, Egypt, India, Mexico, Saudi Arabia, Singapore, the United Arab Emirates, the United Kingdom and the United States.

HRO has distilled the key findings that relate to building a strong workplace culture below.

1. Pandemic or not, make sure employees feel safe at work - physically and mentally

Safety is not a foregone conclusion. Organisations must have critical elements in place for safety to become a reality, including buy-in from management, employee involvement, intra-organisational communication, analyses of potential hazards in the workplace, procedures to prevent and control those hazards, and organisation-wide training.

However, there’s more to safety than physical protection. Organisations need to foster safe environments for communication that empower employees to speak up. Globally, over four out of five workers (82%) said they feel safe voicing their opinions about work-related issues. Most workers also said that they feel comfortable engaging in honest conversations about work topics with their managers (82%) and co-workers (89%), and they frequently have candid conversations about work with their managers (78%) and co-workers (85%).

Candidness and transparency—in good faith—breed a strong workplace culture. Workers need to feel comfortable with supervisors, and supervisors must be able to have tough conversations with their subordinates.

The Great Resignation is sweeping the globe. People are leaving their jobs at record rates. Almost half of workers (45%) globally have thought about leaving their current organisation, and 30% have actively searched for a new job in the past six months.

One reason employees are leaving organisations with good workplace culture is that workers may be experiencing “COVID clarity.” Alexander Alonso, Ph.D., SHRM-SCP, chief knowledge officer for SHRM, explains that many employees are becoming more aware of what they really want out of a job and their life as a result of the pandemic. For many workers, simply bringing home a paycheck isn’t enough—they want to find purpose in their professional lives.

People management also matters. Strong supervisors make their employees feel inspired and motivated at work, whereas weak supervisors contribute to irritation and dissatisfaction. Workers become disillusioned when they see their supervisor allowing co-workers to get away with poor behaviour, and 62% of workers who are actively looking for a new job said they see this behaviour at work. 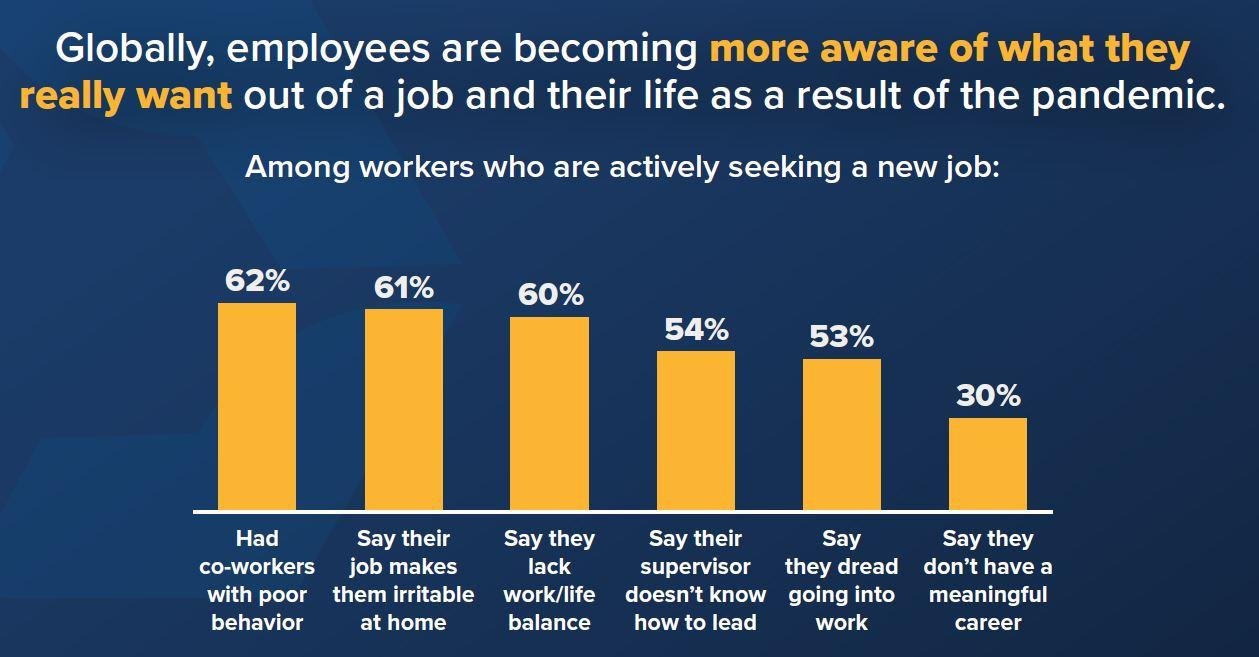 3. Incompetent supervisors: A void in leadership can quickly lead to turnover

More than four in 10 workers (42%) have witnessed inconsiderate treatment of a co-worker by a manager in the past year. Inconsiderate behaviors like bullying or gossiping are destructive when left unaddressed. When supervisors are untrustworthy or insensitive to the needs of their workers, it isn’t long before work environments become toxic. Workers need to feel safe in their workplace, and an integral component is ensuring all workers are treated with respect.

Only 32% of employees who rated their culture as good said their supervisor allows employees to get away with bad behaviour. By staying silent and ignoring the problem, supervisors are harming the morale of their workers. Worse yet, when tolerated, bad behaviour is unlikely to subside.

Achal Khanna, CEO – SHRM India, APAC & MENA, commented: "When the employees feel safe and heard at work, their productivity is bound to increase, which will ultimately benefit the organisation. Now is the best time to acknowledge the significance of communication and embrace an environment with a worker-first approach."