According to the latest Workplace Safety and Health figures released by the Ministry of Manpower (MOM), the top three occupational diseases in H1 2018 were work-related musculoskeletal disorders (WRMSD), noise induced deafness (NID) and occupational skin diseases.

Including non-fatal cases, there were fewer workplace injuries, dangerous occurrences and occupational diseases in H1 2018 compared to H2 2017 and H1 2017 across all sectors.

Among sectors that have accounted for the most fatal and major injuries in recent years, the manufacturing, and transport and storage sectors saw signs of improvement. 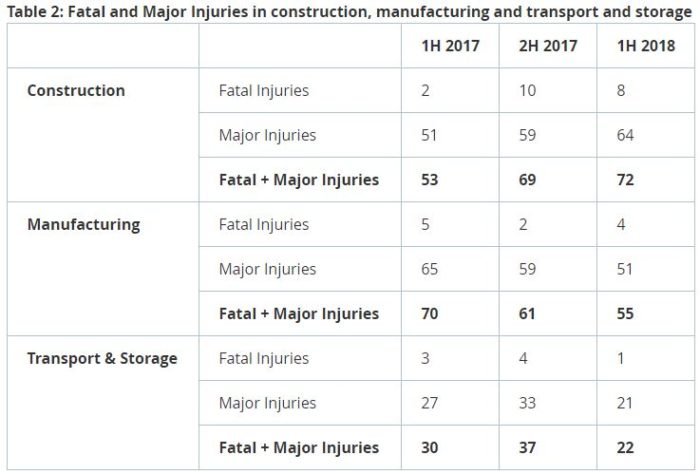 Continuing the downward trend, vehicular-related fatalities (the top cause of workplace fatalities annually since 2013) also saw a reduction, from seven cases in both H1 2017 and H2 2017, to four in H1 2018.

However, falls remained a concern, causing seven fatalities in H1 2018. More than half of the fatalities from falls (four cases) in 1H 2018 occurred in construction.

At the same time, the number of dangerous occurrences (DO), which are incidents with a high potential for multiple fatalities, continued to decline from 20 cases in H1 2017, to 15 cases in H2 2017, nine in H1 2018. It was noted that most of these incidents involved crane safety.