Southeast Asians want to achieve early retirement, with 12% in Malaysia saying they are "on track" 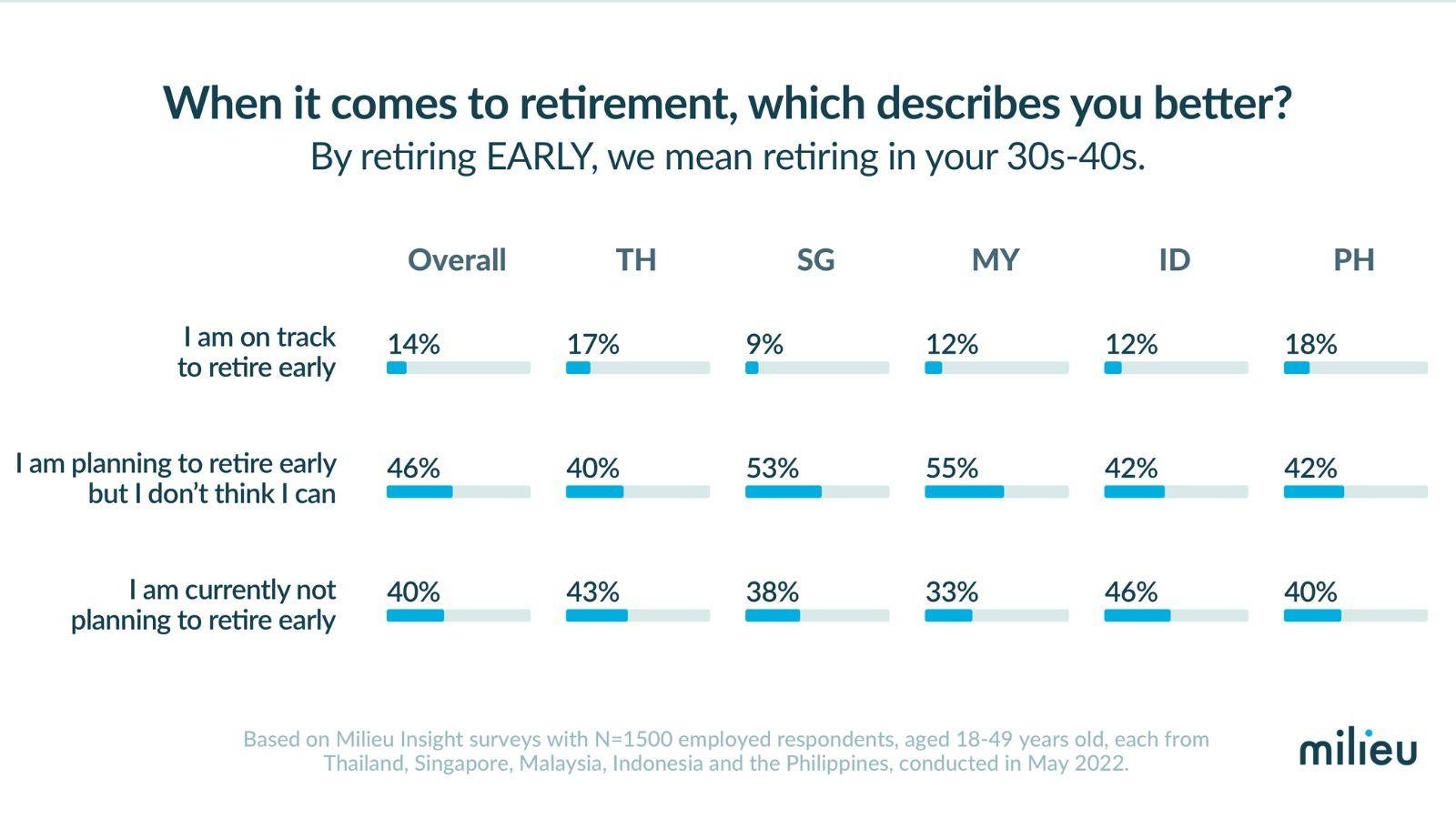 That said, more than half (55%) in Malaysia are planning to retire early, but are unsure if they can — the highest figure across Southeast Asia. Such a sentiment was found to be the lowest in Thailand (40%).

Southeast Asians surveyed want to achieve financial independence and retire early (known as 'FIRE'), with more than six in 10 (62%) respondents expecting to retire in their 50s or 60s.

These were some findings discovered by data & analytics company Milieu Insight through its Financial Independent, Retire Early study, which analysed how 1,500 Southeast Asians, aged 18 to 49, across Singapore, Malaysia, Thailand, Indonesia, and the Philippines, are "aggressively tightening belts, and finding multiple sources of income in order to achieve early financial freedom".

Looking at Malaysia's figures, more than one in 10 (12%) say that they are "on track" for early retirement — the same sentiment expressed by respondents in Indonesia (12%). Respondents in Singapore are the least "on track" for early retirement, at 9%, while those in the Philippines are the most "on track" (18%). That said, more than half (55%) in Malaysia are planning to retire early, but are unsure if they can — the highest figure across Southeast Asia. Such a sentiment was found to be the lowest in Thailand (40%).

With regard to other metrics, such as "not planning to retire early", Malaysia ranks fifth — behind Indonesia at 46%, Thailand at 43%, the Philippines at 40%, and Singapore at 38%. 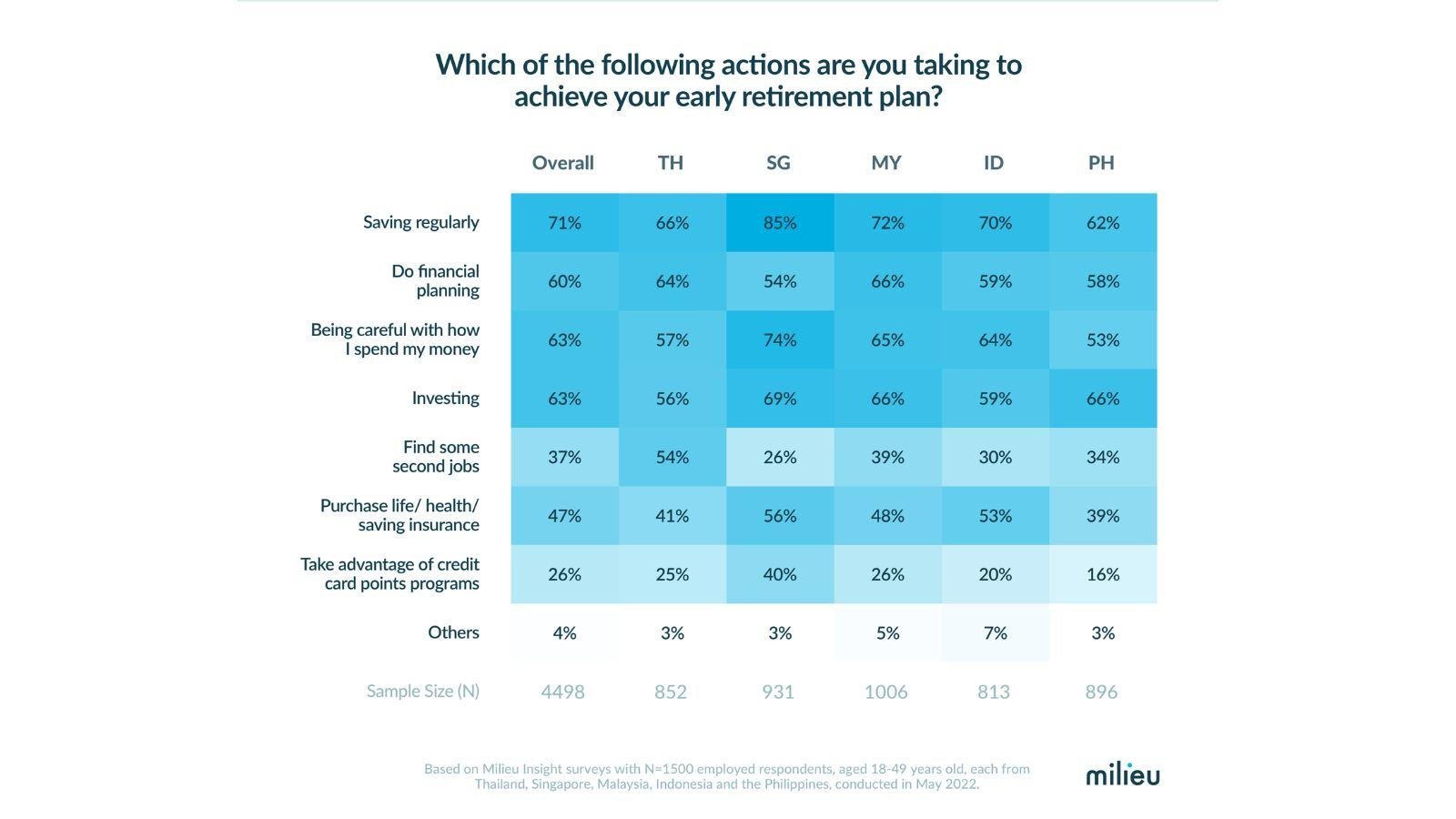 What then are Southeast Asians doing to reach the early retirement stage? According to report findings, the "most common" strategy deployed is saving regularly (71%). This is followed by financial discipline (63%), and investment (63%), strategies that are also the top five for those in Malaysia trying to reach early retirement.

Finding additional employment is, on the other hand, one of the "much less common" strategies, used by 37% of respondents. That said, this is a strategy that resonates more with those in Thailand (54%). Investment, it was discovered, is also more common among more than half of those in Singapore (56%), and in the Philippines (53%).

"Perhaps due to vast amounts of resources on the Internet, most people are hands-on for retirement planning, with only 31% of those who plan to retire early saying that they have a financial consultant to help plan for retirement," the analysts shared.

At the moment, more than half (57%) of the respondents across Southeast Asia feel "very or somewhat" positive about their journey towards achieving early retirement. It was also revealed that between those who are "on track" for early retirement, and those who are "planning to retire early, but unsure if they can", those in the former group (83%) tend to feel "more positive" about achieving early retirement, while less than half in the latter group (49%) feel "very or somewhat" positive.

ALSO READ: Reminder: Retirement age in Singapore to increase to 63 starting from 1 July 2022