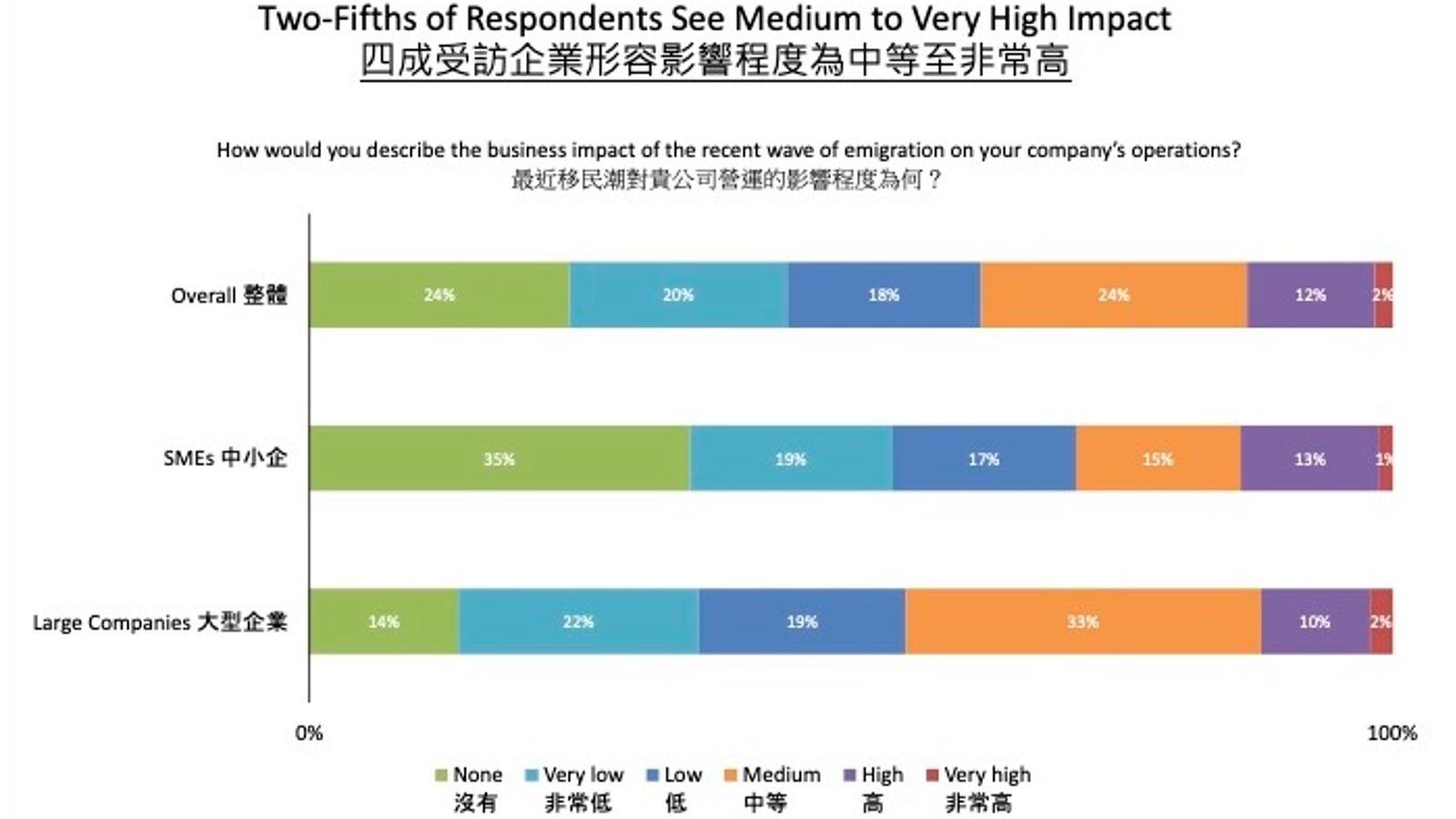 More than a third (38%) of respondents said they had been adversely affected by the loss of emigrating workers to varying degrees, ranging from medium, high, to very high.

The recent wave in emigration is leading to a shortage in skilled workers and affecting Hong Kong businesses. This is according to a survey by the Hong Kong General Chamber of Commerce (HKGCC).

A total of 38% of respondents of the survey said they had been adversely affected by the loss of emigrating workers to varying degrees, ranging from medium (24%), high (12%), to very high (2%).

Although more than half (58%) of respondents indicated that they expect the emigration-induced turnover rate to stabilise in 2022, some 35% of respondents were less optimistic and anticipated more skills shortages. 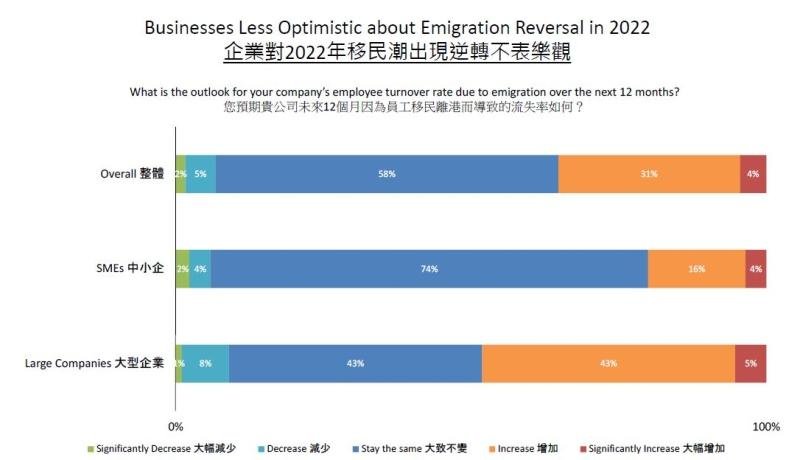 "Hong Kong is facing an exodus of educated workers on a scale not seen since the early 1990s and this will have a material knock-on impact on the economy," said Chamber Chairman Peter Wong.

"Given the importance of human capital in Hong Kong’s service-driven and knowledge-based economy, there is real cause for concern if we cannot stem the current brain drain." 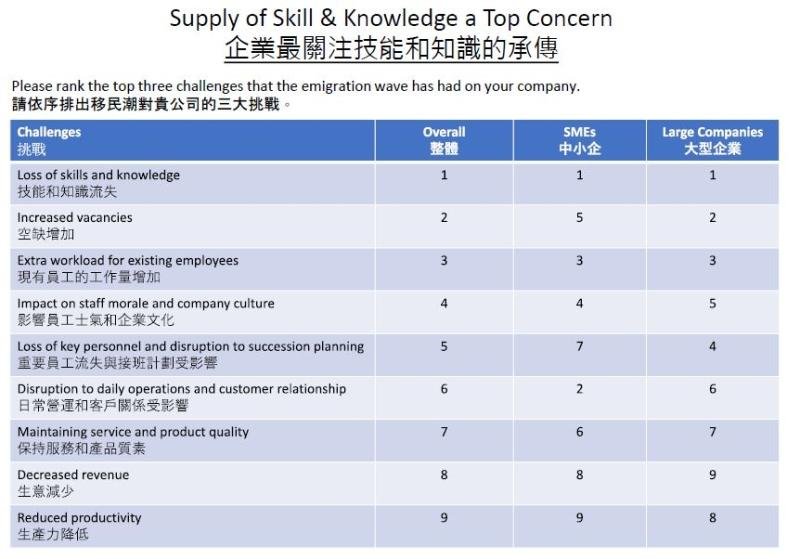 Conducted in January, this year the chamber spoke to over 200 companies for the survey.

The loss in talent spans a broad range of skills, from engineering and technical services, to finance and accounting, to information technology. Middle-aged employees were more likely to emigrate as respondents indicated that 30-39 and 40-49 were the two dominant age groups leaving Hong Kong. 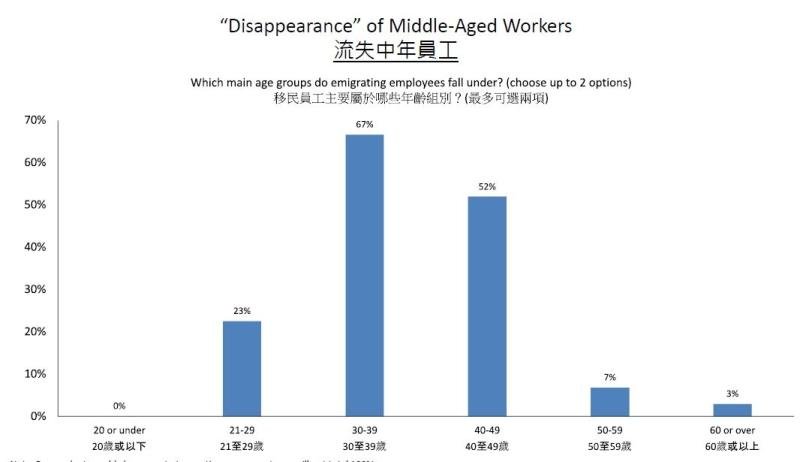 In terms of organisational hierarchy, middle management and first-level management were the two groups more likely to depart, compared to those in rank-and-file and senior management positions.

“The gap created by the departure of mid-level employees is going to pose challenges for businesses, since they are essentially the backbone of a company. In addition to the pecuniary costs incurred in hiring and training of new employees, there are other hidden costs such as time costs and lost business development that have to be factored in as well,” Wong added. 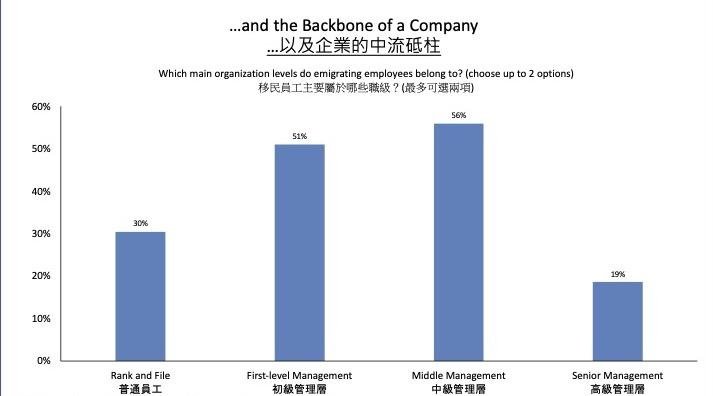 Large companies are investing in succession planning (61%) and increasing automation and digitalisation (51%) to cope with the loss of talent. However, only 28% and 38% of small and medium enterprises (SMEs)  respectively are making similar investments. 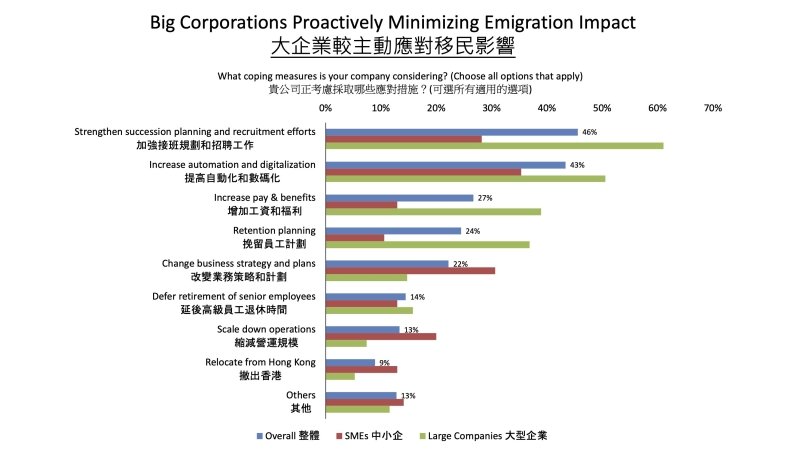 Larger corporations also indicated an expanded budget to tackle the problem, with 39% and 37% of respondents considering increasing pay & benefits and retention planning respectively. The corresponding responses by SMEs were respectively 13% and 11%.

"The global competition for talent is already acute and Hong Kong cannot afford to lose the race to attract and retain talent. To stem the tide of departing workers, it is essential that the Government regularly review its policies to ensure that Hong Kong remains an attractive place to live, work, study, and raise a family," Wong said. 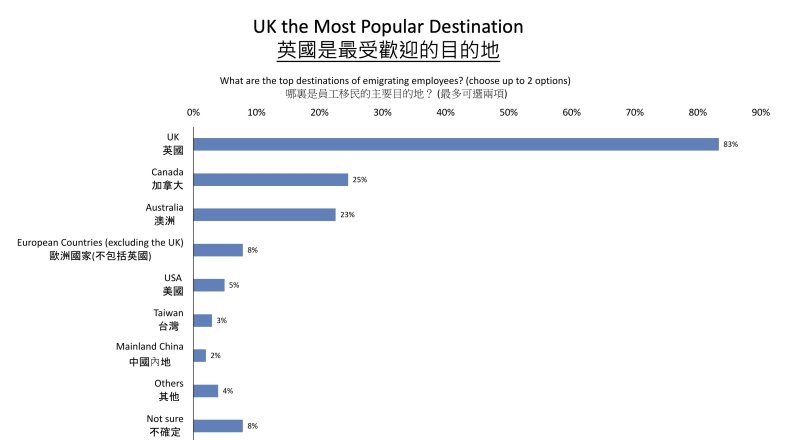 The reasons for people making a hasty exit out of the city had little to do with career prospects.  Better development for children (57%), political considerations (45%), and higher quality of life (27%) were the top three motivating factors for emigrants. 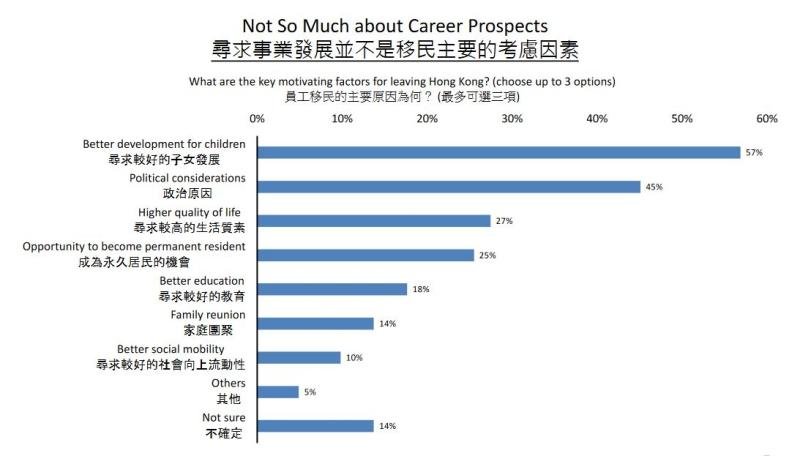 ASLO READ: Two in five people plan to emigrate from Hong Kong in the next five years

Lead image and all other images / HKGCC