Salary benchmark: How much do IT professionals earn globally? 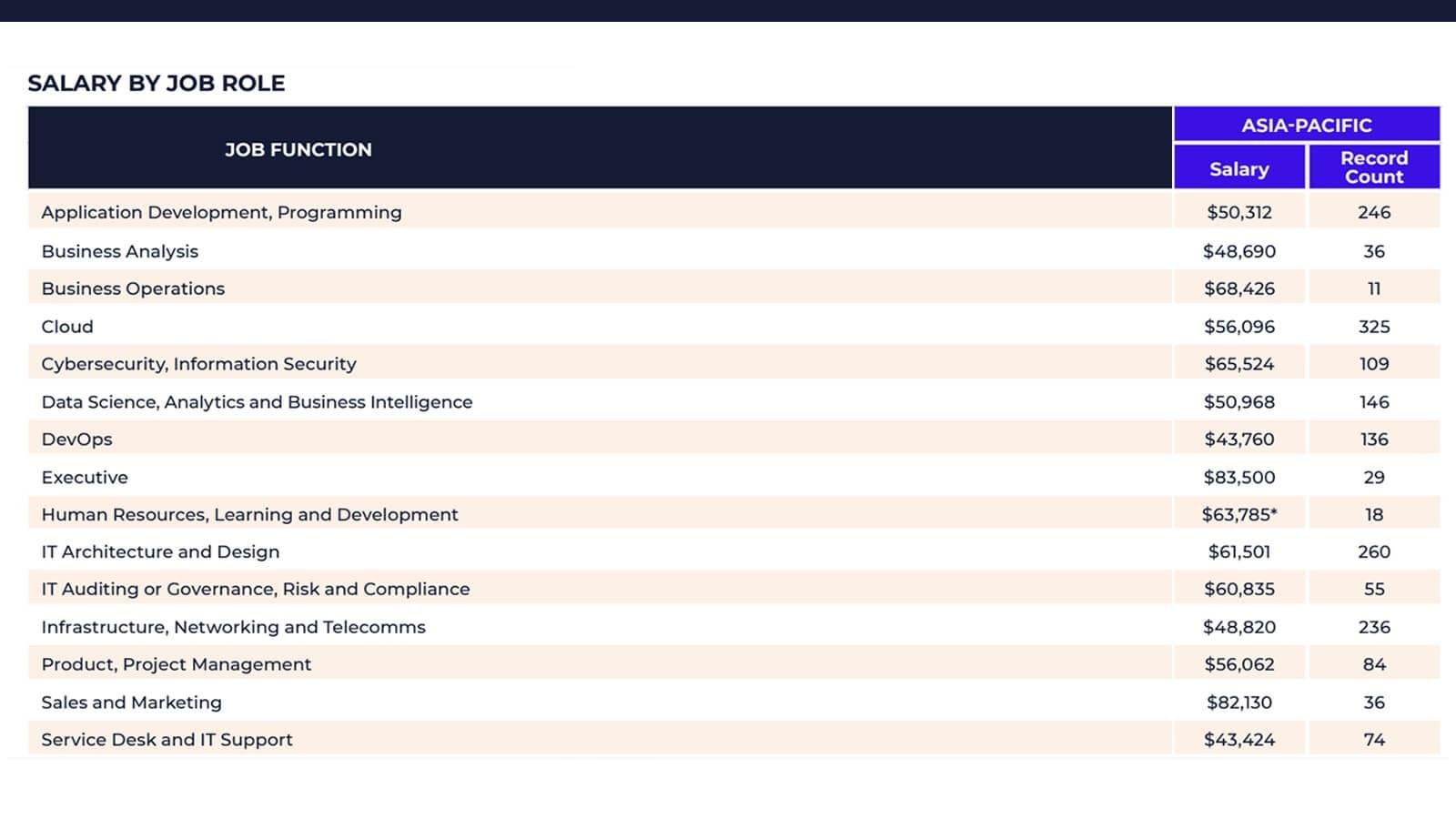 *All salaries were converted into U.S. dollars during the survey to enable relevant comparisons.

It was a year filled with change and uncertainty as the vast majority of us went into recovery mode in a post-pandemic world. COVID-19 sped up digitalisation the world-over where strong IT infrastructure could make or break your business model through months of being at home.

Over the past decades, IT has matured from a supporting role to a strategic one. IT is coming out of the backroom and emerging as a major player within organisations. There is an evolving, holistic role for which IT needs to be prepared — and ready to accept in order to succeed.

In the fast-paced and highly competitive world of IT professionals, the Skillsoft 2022 IT Skills and Salary Report provides a snapshot of today’s salary ranges across regions, skill sets, and experience levels.

In 2021, most survey respondents worked in IT auditing or cybersecurity roles, which tend to command higher salaries. However in 2022, there was higher numbers of respondents in other areas, which may have an impact on regional and global averages. Globally, most IT decision-makers earn more than IT staff. However, once again, IT staff in Asia-Pacific make more (approximately $1,100) than IT decision-makers.

Those in non-management roles can expect to earn $58,336 a year in Asia Pacific; mid and senior level executives in Asia Pacific earn an average salary of $66,458 and $89,737 respectively.

See how salaries correlate with years of experience below:

Overall and as expected, the highest salaries reported were for IT executives. However, roles in human resources, finance, and project management in the IT industry are all some of the highest earners.

In Asia Pacific, IT professionals in communications, public relations, and advertising were the highest paid compared to those in aerospace or defence, as well as pharmaceutical, medical and biotech for North America and EMEA respectively. The data suggests that through job performance and/or by learning new skills, employees can have a direct impact on salary increases. The survey also saw an uptick in raises attributed to added responsibilities and promotions.

The lowest average raise cited was for IT staff in Latin America at 5%. Overall, increase percentages by region were as follows: North America: 8%, Latin America: 6%, EMEA: 7%, and Asia Pacific: 7%.

Performance in their current job topped the list of factors that IT professionals attributed to increased salaries. However, additional responsibilities in their current position saw a significant increase; this factor tied for fourth place in 2021 but was in second place this year.

This may be due to the tight labour market so many employers are experiencing. In addition, raises attributed to developing new skills also increased, demonstrating personal monetary advantage associated with training. Follow us on Telegram and on Instagram @humanresourcesonline for all the latest HR and manpower news from around the region.