Employees in Guangzhou and Zhongshan can expect the highest salary increase for 2023, while Hong Kong's fresh graduates earn the most among their GBA counterparts.

While Hong Kong employees can expect a pay rise for 2023 at a rate similar to this year, the overall salary adjustment still lags behind most of Guangdong's cities, according to a recent pay and benefits survey.

The 2022 Guangdong-Hong Kong-Macao Greater Bay Area (HKSAR) Pay and Benefits Survey showed that the overall actual salary increases for Hong Kong organisations ranged from 3% to 3.3% for the period from July 2021 to June 2022. The overall salary increase forecast for 2023 would be within the same range.

In comparison, over the same period, the overall actual salary increases for the organisations surveyed in other Guangdong cities ranged from 4.5% to 5.2%. For this region, the salary adjustment forecast for 2023 would range from 4.1% to 4.4%.

Meanwhile, neighbouring SAR Macao saw the lowest overall salary increase among GBA cities, ranging from -1% to 0.9%. The projected salary adjustment for 2023 would only range from 1.2% to 2.7%.

Across the whole Greater Bay Area, “organisation’s overall performance” is the most important criterion of salary review for all levels of staff in 2022, followed by “individual performance” (Hong Kong SAR and Macao SAR) and “departmental performance” (other Guangdong cities). 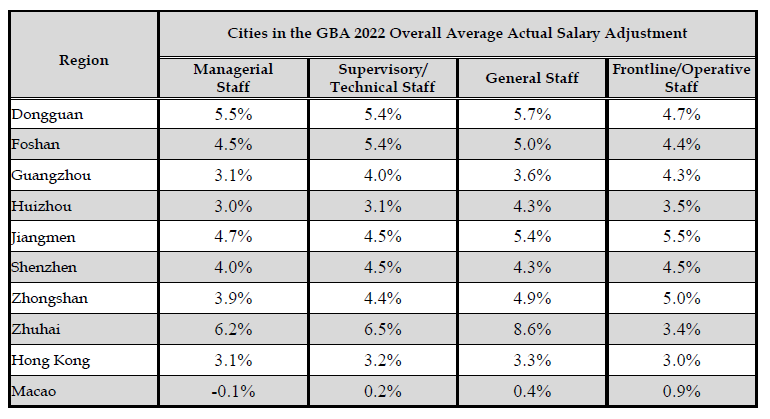 Hong Kong's fresh graduates earn the most among their GBA counterparts. According to the survey, the lowest average starting salary was recorded in the production function at HK$11,000 for graduates of Hong Kong Secondary school or below while the highest figure reported was an average of HK$20,938 in the engineering function for graduates of a Master’s Degree or above.

Graduated with a Bachelor Degree in engineering and the IT function were recorded to earn the highest figures (HK$18,495 & HK$18,266). In general, the starting salaries for fresh graduates were higher than those of last year.

On the other hand, in other Guangdong cities, those who graduated in a Master’s Degree or above, Bachelor's Degree, and Diploma / Associate Degree or equivalent, specifically in the R&D function were recorded to have the highest monthly starting salaries at RMB 8,223, RMB 7,415 & RMB 5,891 respectively.

Comparing with last year, the entry salary levels for most fresh graduates from different academic qualifications were slightly higher than last year.

Nearly eight in ten (79.4%) participating Hong Kong organisations indicated that they offered incentive schemes to employees. Offering a variable bonus was the most popular scheme, followed by a guaranteed bonus.

In Macao, the guaranteed bonus offered to different staff levels was one month whereas variable bonus ranged from 1.3 to 1.8 months. “Organisation’s overall performance” was the most important criterion for providing variable bonus, followed by “individual performance”.

ALSO READ: Hong Kong employees can expect a pay rise of 3.6% next year

Around 40% of participating Hong Kong organisations provided employees with a one-day full-pay "birthday leave". The number of days of “examination leave” offered to different staff levels ranged from 2.7 to 2.8 days, which is fewer than that of last year (2.5 to 3.7 days).

As for other Guangdong cities, around 20% participating organisations provided average 2.3 days of full pay sick leave and 1.3 days of additional leaves beyond the statutory requirements. The percentages of organisations offering various kinds of benefits to all levels of staff were slightly lower than last year.

Close to one-seventh participating organisations in other Guangdong cities adopted the flexible employment model, while 8.2% said that they would try to adopt this employment model in the next year.

The overall average turnover percentage in Macao  ranged from 9.4% to 13.1% in the survey period. The highest turnover percentage was recorded in the frontline/operative staff level. “Family issues”, “career/promotion prospect” and “pay” were ranked as the top reasons for employee turnover.

As for other Guangdong cities, the average turnover percentage ranged from 12.0% to 31.6% for the survey period. There were significant differences by region and by staff level. The highest turnover percentage was recorded in frontline/operative staff. “Pay” was ranked as the top reasons for employee turnover.

Ninety-six out of 158 responding organisations in other Guangdong cities had employee involuntary turnover this year. The main reason was “employee work performance”. Except "others" sector, the hospitality & catering sector recorded the highest percentage (3.4%). By company size, small-medium size organisations retrenched the highest percentage (5.5%). 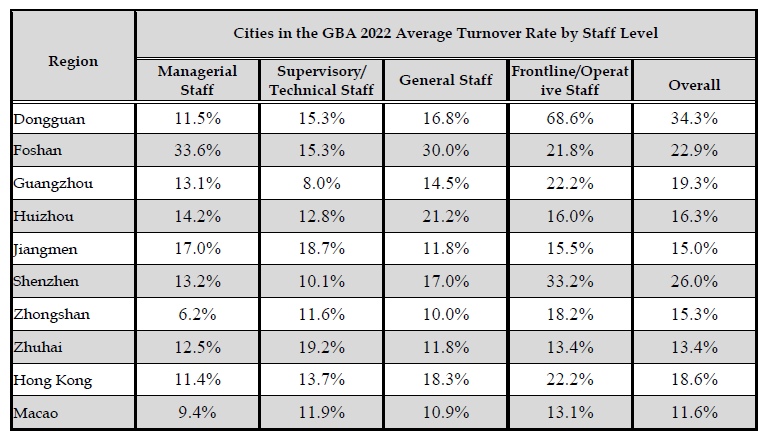 The 2022 Guangdong-Hong Kong-Macao Greater Bay Area (HKSAR) Pay and Benefits Survey was conducted by the Centre for Human Resources Strategy and Development of School of Business of Hong Kong Baptist University, Research Center for Human Resources Management of School of Business Administration of South China University of Technology, Hong Kong People Management Association and Talent Development and Management Association of Guangdong. This year, it also received support from the University of Macau.