A survey of 756 Singaporeans by YouGov Omnibus finds that a quarter (25%) almost never leave work on time, 22% ‘rarely’ leave the office on time, while 3% ‘never’ do.

That leaves close to half (47%) of Singaporeans saying they leave the office on time ‘most of the time’, and three in ten (28%) doing so ‘sometimes’.

While there may be several reasons for staying back late, almost six in ten (61%) said the reason is 'showing face', or the practice of presenteeism – staying at work for longer than required to boost one’s own professional standing.

The results weave in to Human Resources' own spot-poll of more than 300 readers, which found that for a majority (34%) of respondents, work-life balance means "leaving office on time daily". "Flexible working hours" is a close second (33%), following by "not working on the weekend" (19%).

Back to the YouGov findings, it cites the main reasons why Singaporeans are so concerned about ‘showing face’ - 43% believe that it's important to do so to advance their career. 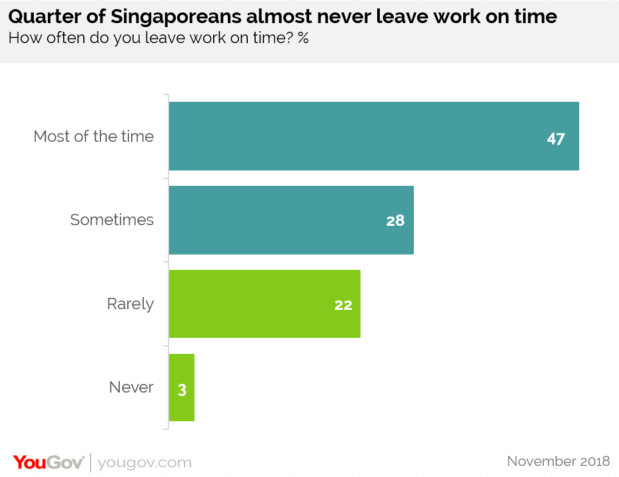 Jake Gammon, Head of YouGov Omnibus in APAC commented: "Productivity is always one of the biggest things businesses have to address; and long hours do not always equate to productivity."