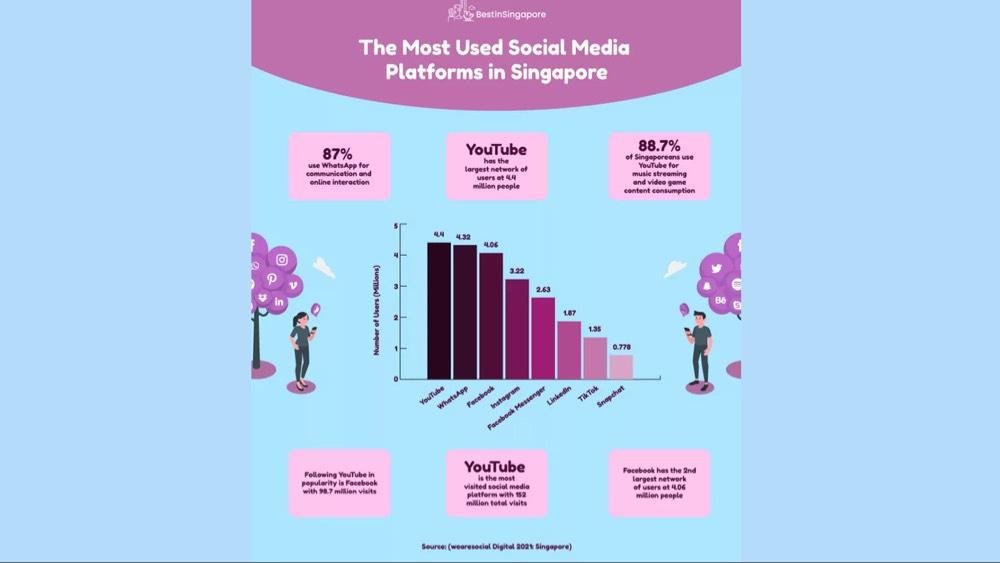 With about 4.4mn YouTube users in the nation, Singaporeans spend an average of two hours on the app daily.

Singapore has approximately 4.96mn social media users, review site Best In Singapore revealed. This accounts for about 84.4% of the country’s total population—and this number is projected reach up to 5.04mn in 2024. In terms of which social media platforms Singaporeans are mostly on, it is YouTube (4.4mn users) and WhatsApp (4.32mn).

Singaporeans (88.7%) use YouTube on a daily basis—two hours per day—for general media consumption. In fact, the report noted that 45% of Singaporeans prefer YouTube to traditional TV shows; with 60% of them finding the platform useful when researching for products prior to any purchase. As for WhatsApp, locals mainly use it for pure online communication, which 87% of users prefer to use it as opposed to other platforms such as Messenger and WeChat.

The full list of Singapore's most popular social media platforms is shared in the lead image above. As for time spent on YouTube, more details are shared in the image below: 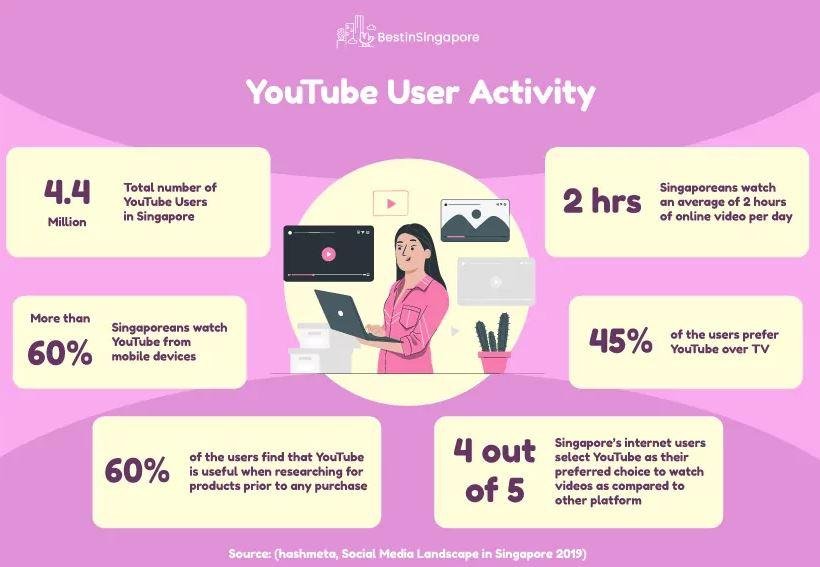 With the country having over 8.5mn mobile connections, which is one of the highest mobile penetration rates in the world as of 2020, it comes as no surprise that 72.9% of users access social media solely through mobile phones. "Ultimately this translates to 145% of Singapore’s population, meaning many people own more than one mobile device," the report revealed.

To compare, only 1.2% of users rely on laptops and desktops to access social media, while 25.9% of users relying on both mobile and computer devices.

As for Singapore’s younger demographic, they spend time largely on social media platforms such as YouTube and TikTok. A similar trend could also be seen for Instagram, where 85% of users are aged between 16 and 24 years.

"Though not as popular as YouTube and Instagram, TikTok has also managed to captivate much of the island’s younger audiences. This up-and-coming platform places emphasis on portrait-format videos made by various users," it was shared in the report.

Using the United States (US) as a reference point, 41% of Americans on TikTok were aged between 16 and 24 years old. For Singapore, a similar portion—and age—of users also spend the majority of their time on the app.

"There has yet to be a definite figure for the percentage of teenagers among Singapore’s 1.35mn TikTok users. But, given the platform’s exponential growth, it is likely that the country will see numbers equivalent to, if not exceeding, those put out by the US social media crowd," an analysis from the report revealed.