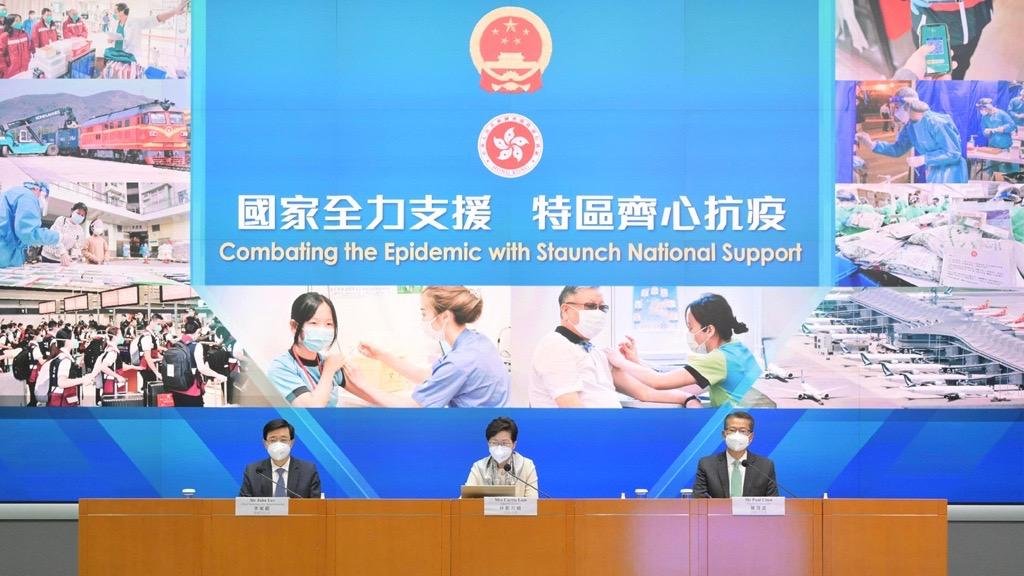 In a 'mid-wave' review, Hong Kong Chief Executive Carrie Lam announced Hong Kong would scrap the nine-country flight ban, as well as shorten quarantine on arrivals. Here's what to expect after 20 April 2022.

Hong Kong will lift a ban on flights from nine countries on 1 April 2022 but passengers still need to fulfil certain conditions to enter the city, including a valid booking at a quarantine hotel. Hong Kong Chief Executive Carrie announced this in her daily press conference on Monday (21 March), stating that the ban on flights from nine countries, including Australia, Canada, France, India, Nepal, Pakistan, the Philippines, the UK and the US, will be scrapped next month.

However, several conditions still apply. Passengers need to be fully vaccinated, and test negative for the virus no more than 48 hours before boarding. They should also have a valid booking at a quarantine hotel.

The quarantine period for passengers arriving from overseas countries will also be shortened to seven days from 14 days if they have negative rapid test results on the sixth and seventh days. Passengers who test positive on arrival will be sent to designated quarantine facilities for 14 days instead.

The flight ban was introduced on 8 January due to the spread of Omicron variant. Anyone who has been to these countries in the previous 14 days has also not been allowed to board a flight to the city.

In addition to the flight ban, Lam also announced that social-distancing rules will be relaxed in three phases starting from 21 April.

Lam also said a universal testing plan for all Hong Kong residents has been shelved for now. Schools will resume face-to-face classes starting from 19 April , starting with kindergartens, primary schools and international schools. Secondary schools are set to resume normal teaching after the Diploma of Secondary Education public exams are finished.

Meanwhile, as of 20 March, the government has also brought forward the deadline for people to get their third COVID-19 vaccination (also known as a booster) by a month to 31 May under its vaccine pass scheme. The government also updated the vaccine pass requirements for people who have recovered from COVID - under these guidelines, they are not required to get the third vaccine if they have already been double-jabbed. While a special QR code is on its way for those recovered from COVID-19 who's positive results are recorded in the government's system.

The news comes shortly after Hong Kong's financial chief Paul Chan said last week the Hong Kong Sevens will take place in November 2022, and the government is planning to host business leaders in the city to rebuild Hong Kong's reputation as an international business hub during the sporting event.

The event looks to bring more than 100 finance leaders to Hong Kong as a way to rebuild the city's damaged reputation as an international business hub. Chan said that after more than two years of travel restrictions, it will be important for Hong Kong to reconnect with the international community. He added that the Hong Kong government's plan to bring business leaders to the city is aimed at allowing them to see the situation and bring about business and investment opportunities. He also stated travel between Hong Kong and Mainland China could resume in the second half of this year.

To date many industries in Hong Kong have been badly battered due to COVID-19 restrictions. In the world of fitness, Fitness First Hong Kong began its liquidation process. The company said, the prolonged challenges in not being able to operate its fitness centres have led the team down this path. The company added that over the past months, its management team, alongside its parent company and shareholders, had explored and exhausted all avenues in the pursuit of maintaining business operations.

On the tourism front, last week Hong Kong's iconic tourist attraction the Star Ferry said it has been losing money since mid-2019 and it now needs to borrow money to handle the cost of daily operations, as its revenue can no longer cover the salaries of employees.

Meanwhile, earlier this month Genting Hong Kong subsidiary Dream Cruises also ceased operations. The damage went well beyond Hong Kong as the company dismissed at least 60 employees in Singapore, with many of them being Singaporeans and permanent residents. The layoffs at Genting Hong Kong reportedly began in January, and were done in phases.

In an earlier study done by American Chamber of Commerce (AmCham), it was found that travel restrictions in Hong Kong are pushing away as more than half of respondents said they would leave the city, while the majority of businesses felt the government was “unconcerned” or “dismissive” about business concerns. In its 2022 Business Sentiment Survey Report, 53% of respondents said the restrictions related to the pandemic had spurred them to leave Hong Kong. Only 10% of them said they were "less unlikely" and "much less likely" to leave the city.

With six out of 10 businesses based in Hong Kong as part of the global or regional headquarters, hefty quarantine rules and travel restrictions continued are said to be creating “significant disruptions” in offices outside Hong Kong. Over 30% of respondents had to delay new investments in Hong Kong, and 30% struggled to fill senior executive roles.

ASLO READ: Employees leaving Hong Kong: What can employers do to recruit and retain staff?

This article was first reported by Marketing Interactive. Additional reporting by HRO