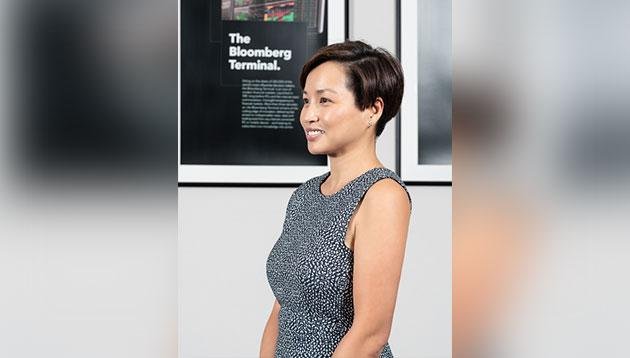 Human Resources talks exclusively to Alisha Fernando, APAC head of D&I at Bloomberg, on how her extraordinary journey has taught her resilience in HR – and how the media and technology company is creating an inclusive workplace in Asia and beyond. Robert Blain reports

Vital stats: Alisha Fernando joined Bloomberg’s Hong Kong office in May of this year, where she is responsible for driving the media and technology company’s D&I strategy across the region. She took up her position with Bloomberg after relocating from Australia where she undertook several senior HR postings, including inclusion programme manager at ANZ Bank, and associate director of D&I at the University of Melbourne.

You fled Vietnam on a boat as a child, were rescued by a Dutch ship on the South China Sea and eventually settled in Australia. What is your recollection of that harrowing experience? I have no conscious recollection of fleeing Vietnam, thankfully I think. But there are things that impact me today that I know stem from my experience. For example, I’m terrified of water, open water – so it’s not great that I live on an island now. Boats and I don’t get along very well.

One very fortunate thing I did was reunite with the Dutch captain of the ship who rescued me. He and I met in Holland. He took photos of my rescue actually and he had kept them. And he kept the manifest, which also helped me to fill in the blanks.

How has that experience shaped your career? It definitely has. When we landed in Tasmania my parents struggled to get jobs. So I saw how difficult it was for them to break into the labour market and find a job. So when I got into the workforce I quickly learned that a lot of the time it’s not about what you know, but who you know. So I became very aware of my privilege and what I could do to help.

I have worked for the ANZ bank for a good chunk of my career so far. And I immediately became very engaged and very passionate about trying to help those who don’t have the foot in the door or the established networks.

My working life has been shaped by my upbringing and what my parents had been exposed to and went through. So I am very passionate about helping those who are under-represented or minority groups.

Would you say that your background has given you resilience in your role as a HR professional? Yes. In the HR space I think we are uniquely placed to see the good and the bad within organisations. Sometimes, as a HR professional you are either challenged in a business sense, and that impacts on your emotions and your ability to perform – so you have to separate emotions from the business. So resilience plays a key part in conducting yourself in a way that is business-appropriate.

My upbringing and experience has given me the ability to cope and rise above – and I would even say to be quite dogmatic in some ways. Even stubborn to see things through.

My resilience helps me to look ahead instead of being bogged down.

Like me, they (expats) are parachuted in to take leadership roles across APAC. In other regions, such as America, you have minority groups pushing to get into leadership.

We shouldn’t assume anything when trying to onboard people and that when we’re creating an inclusive work environment, assumptions are what’s going to be our downfall.

So here at Bloomberg we recognised that and we built the local leadership accelerator programme. And that programme is run by our leadership development team and it’s completely focused on taking our local talent and giving them the skills and the opportunities to move into leadership roles.

So over time, companies like us are going to rely less on recruiting people from overseas because we have a great pipeline of local talent that can step up to leadership roles.

Describe a HR initiative you successfully implemented at one your previous companies? One of the most recent things I’ve done (in 2018) is that when I was at the University of Melbourne – which is 165 years old – they never had a D&I agenda at all. Being in a university environment, you’ve got students who are Millennial-aged and younger, and you’ve got academics of an older generation.

There was a clash, and an urgent need to talk about LGBTI inclusion. So we worked with external partners about how we could introduce the conversation around LGBTI inclusion across the university in a way that was helpful for our students.

So last year we were about to roll out LGBTI training sessions across the whole university. And that has completely reshaped the university’s culture around LGBTI inclusion.

Any notable failures – and what did you learn? In my line of work there are always failures because we’re learning all the time. No one is a world leader in this space that hasn’t made mistakes.

I learned from one specific mistake about assumptions. And the assumptions that we make when we look at inclusion.

I helped create a programme that brought refugees and asylum seekers into the workplace. We were able to hire the chief statistician of the Iranian Interior Ministry. His CV was amazing and he was a numbers man, so we thought we’d put him into a workforce planning role.

Day one we gave him onboarding and orientation and then sat him down at his desk. But he missed the calendar invite to his welcome morning tea and didn’t turn up.

So we went to look for him and found him at his desk and when I asked the reasons why he missed his own welcoming, it was only then we realised that our assumptions about this man – based on him being extremely experienced and senior – were completely wrong – he’d never used a computer in his working life. So our assumptions were completely wrong, that we assumed that everyone knew how to use email.

We shouldn’t assume anything when trying to onboard people and that when we’re creating an inclusive work environment, assumptions are what’s going to be our downfall.

What are some of the D&I initiatives that Bloomberg has implemented recently? The first is the Gender Equality Index. It encourages organisations across industries to report on their gender equality strategies and progress – it’s a yearly index.

What we’re finding is that organisations are getting on board and reporting on gender quality. We are also doing the same and the richer the data (the better the results).

And that is something where Bloomberg has led from the front and implemented over the past few years.

The other thing I’d like to talk about is “New Voices”. I’m very proud to say this started in APAC and has now gone global. Our APAC news team actually recognised that we have a unique opportunity to help promote – given we’re a part-media organisation – more women’s voices into the media.

So we developed this programme to bring on outstanding female talent and give them the skills and exposure to step into speaking on TV or our other media channels.

What are some HR/D&I initiatives you are looking to bring in at Bloomberg? One of the things we know from the data – and this is not unique to Bloomberg, but across all industries – is that women drop out of the workforce as their tenure increases.

Because I think, again, that assumptions are the death of inclusion. We really need to try and understand the root causes that are causing women to leave the workforce.

We’re investing in our people and we want our people to stay. So we want to understand why women are leaving and what are the systemic issues – if there are any – so we can design interventions to address and encourage our women to stay with us.

We’re also interested in introducing the conversation around mental health and wellbeing. Across APAC, it’s at varying levels of maturity. In Australia, they’re probably a little bit more mature in the conversation, and then there are countries in the region that haven’t started the conversation yet.

And it’s also about understanding the cultural nuances in each of our hubs so that when we introduce the conversation on health and wellbeing, it’s culturally appropriate – it’s nuanced to each of the countries.

When you talk about inclusion, when you strip it all back, then everyone who walks into our office should feel welcome, safe and valued for their contribution, and respected. How do we do that to ensure everyone feels that way, not just some, but all?

So it’s important that we’re creating an inclusive workplace where everyone, not just our women, not just our LGBTI community, but everyone who walks through our doors feels those basic four things: Welcome, safe, valued and respected.