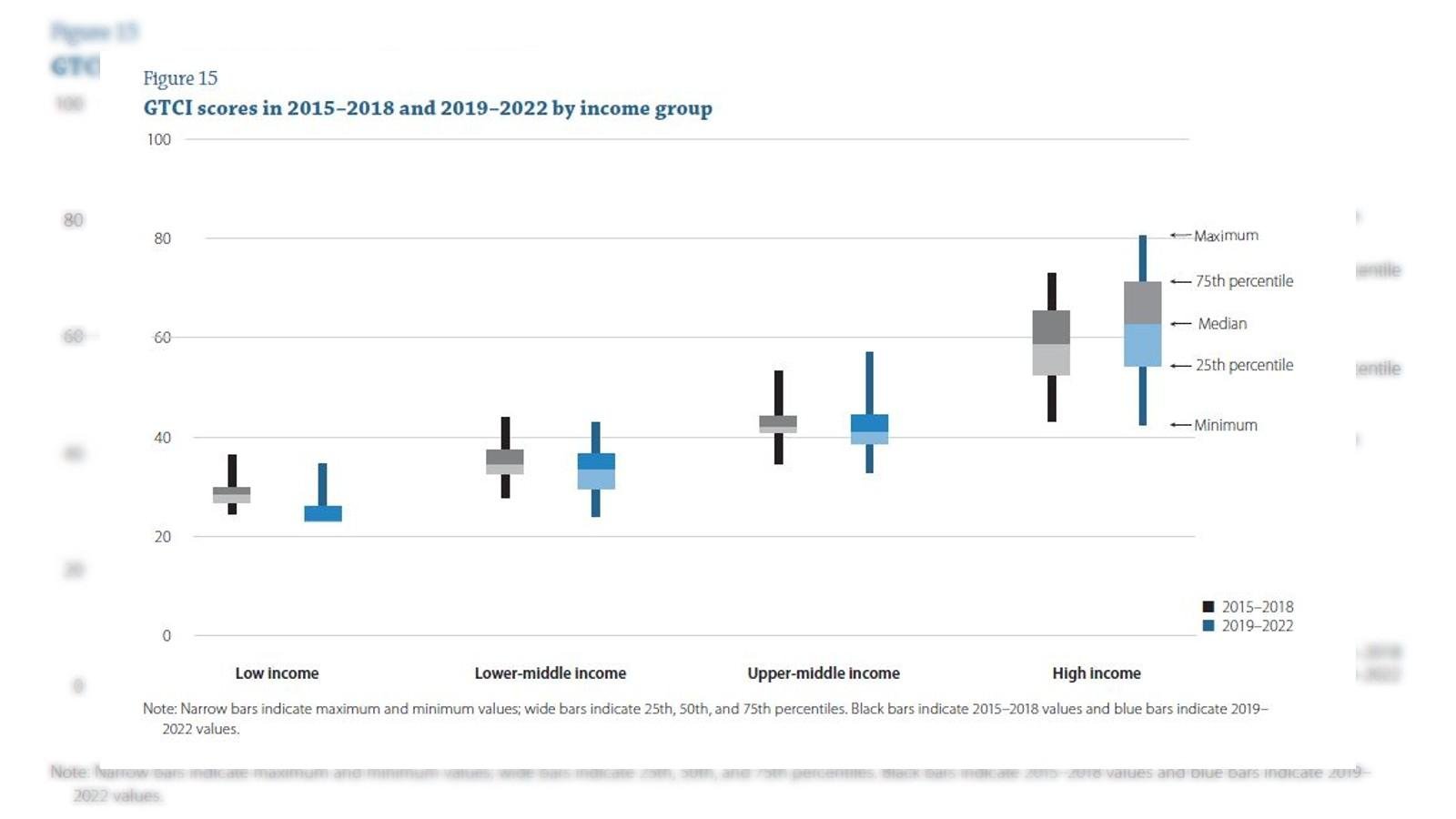 Published by INSEAD, in collaboration with Portulans Institute and the Human Capital Leadership Institute, the ninth edition of the report covers 133 countries and 175 cities from 79 economies around the world, across all income groups, measuring how countries and cities grow, attract, and retain talent.

Taking the top three spots on the country rankings are Switzerland, Singapore, and Denmark. Overall, the top 50 countries on the Index are:

Per the report, top 15 performers are not only the most talent-competitive countries overall; they also dominate all the key dimensions of the GTCI. More specifically, the top three countries in each pillar also feature among the top 15 countries in the overall index. Switzerland and Singapore each make it into the top three in four of the six pillars, while the US features in the top three in three pillars and Denmark is a top-three performer in two pillars.

Five other top 15 countries in the overall index have one top-three rank at the pillar level: the Netherlands, Finland, the UK, Luxembourg, and Iceland.

A look at Malaysia's talent competitiveness

According to the findings, Malaysia saw its rank decrease significantly over the past year, which it cited as largely due to a "dramatic drop in business sentiment." For instance, private sector concerns regarding skills gaps have increased, with an adverse effect on employability (69th) and, in turn, vocational & technical skills (50th). Similarly, the country’s ability to attract (73rd) talent has fallen partly as a result of fewer opportunities for domestic talent to raise their socioeconomic status.

Malaysia’s two strongest pillars are Global Knowledge Skills (33rd) and Enable (36th), where the former dimension is boosted by an "encouraging" talent impact (26th) and the favourable market landscape (27th) stands out in the latter pillar.

As further revealed, Malaysia is among five upper-middle-income countries which are regarded as talent champions, alongside Bulgaria, China, Costa Rica, and Georgia. All five countries, the report explained, experienced improvements in the pillars of Attract, Retain, and Vocational & Technical Skills.

By income group, the report noted that most of the 33 upper-middle-income countries studied stood in the second and third quartiles of the Index (17 and 15 countries respectively), with China, Costa Rica, and Malaysia being the "top-performers".

View the full scoring and ranking for Malaysia across all pillars below (*right-click to view in a new tab): 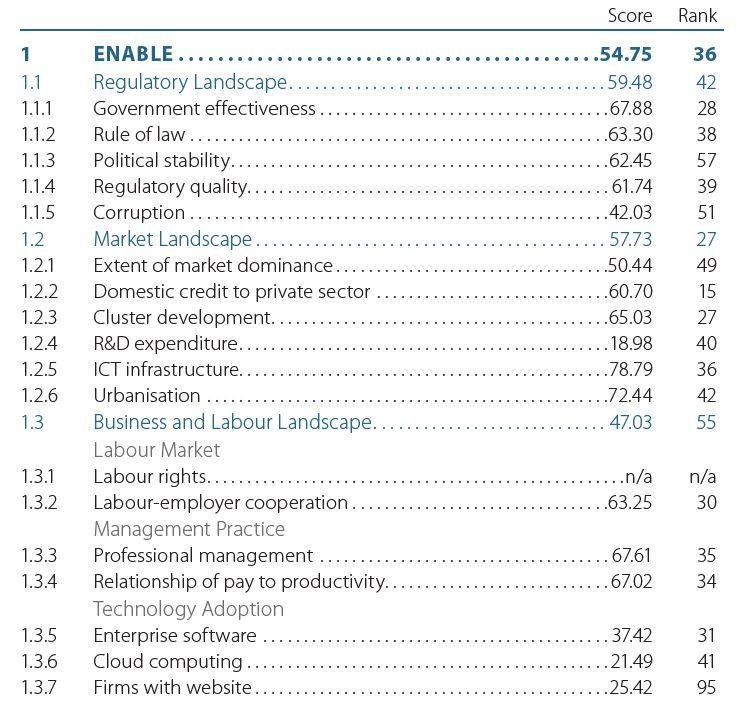 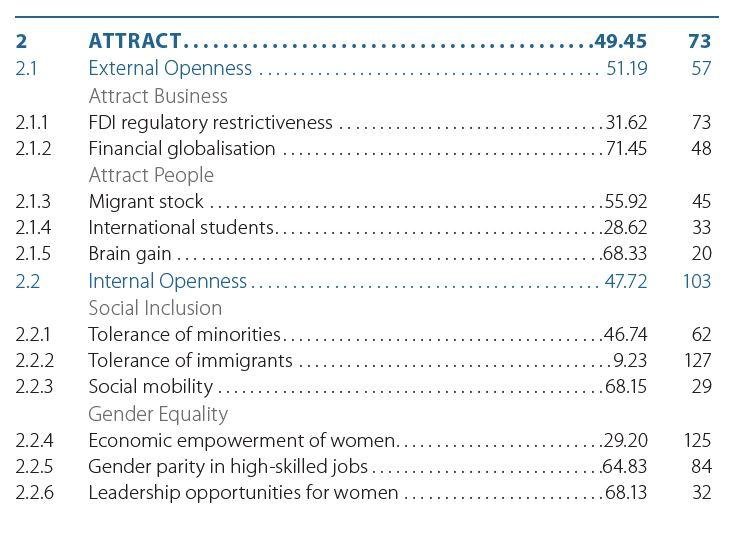 A look at Singapore's talent competitiveness

Looking at Singapore, per the report, Singapore continues to rank just behind Switzerland, as it has for all editions of the Index except the 2020 edition. Singapore also represents the Eastern and Southeast Asian regions in the top 25, followed by Japan (24th), while ranking 1st among the Asian countries surveyed.

Above all, it has been noted as a global leader in Global Knowledge Skills, where it ranks at the top in both sub-pillars: high-level skills and talent impact. The city-state also makes it into the top three in the pillars related to Attract (2nd), Grow (2nd), and Vocational and Technical Skills (3rd), among 49 high-income countries studied. Of particular note are its world-class formal education (1st), lifelong learning (2nd), external openness (4th) towards overseas business and talent, and a high degree of employability (6th). Singapore also comes out among the top with its enabling (5th) environment, where it is the world’s best performer when it comes to the regulatory landscape.

The country’s main weakness remains its ability to retain (36th) talent, where it also registers its lowest sub-pillar ranks. Expanding pension coverage and social protection are among the measures that would improve sustainability (41st), while strengthening personal rights and increasing physician density would boost its rank in the lifestyle (37th) sub-pillar.

View the full scoring and ranking for Singapore across all pillars below (*right-click to view in a new tab): 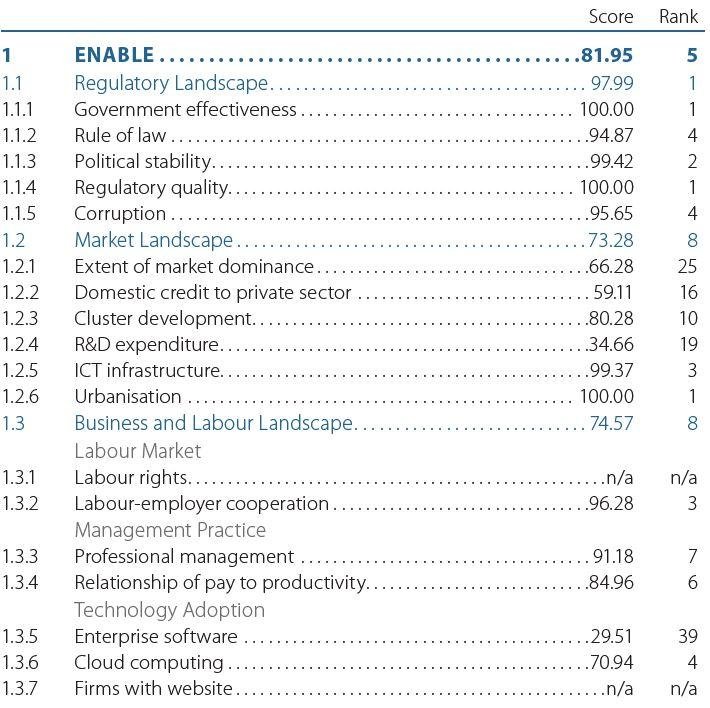 Snapshot: How other markets in the region fare

Apart from the above, the report also highlighted findings for other markets in Southeast Asia and South Asia. Here's a snapshot of five markets we've pulled out:

India (101st) remains the lowest-ranked BRICS member, the report noted. It is also one of the countries which recorded the largest drop in rankings this year. A major reason for the lower ranking is that business sentiment has "plummeted in the past year or two, which presumably is due to a COVID effect." Per further fidnings, its talent competitiveness builds primarily on its strength in tertiary education and programmes, which supports formal education (73rd) and lifelong learning (38th), and, ultimately, the ability to grow (72nd) talent.

The country’s advantage in tertiary education is also reflected in its Global Knowledge Skills (81st), especially the talent impact (70th) of its innovative economy. A sub-optimal business and labour landscape (116th) hampers the enabling (89th) environment, while efforts should be focused on improving both sustainability and lifestyle (94th in both) in order to raise its ability to Retain (96th) talent.

The greatest challenges facing India, however, are to lift its Vocational & Technical Skills (118th) and increase its attraction (130th) of talent. The country is positioned in the bottom quartile of the rankings in all four sub-pillars of these two dimensions.

Coming in 82nd globally, Indonesia is one of two countries that saw the greatest improvement in ranking over time (the other being Azerbaijan), moving up 18 positions between 2015-2018 and 2019-2022. It made "particular strides" with respect to Vocational & Technical Skills (60th). In addition, Indonesia also importantly strengthened its enabling environment, to rank 56th.

Meanwhile, the country also stands in 66th place for the pillar of Grow, 87th for Retain, 109th for Attract, and 100th for Global Knowledge Skills.

The Philippines stands in 80th place among countries studied globally. Looking at the six pillars, the country ranks 90th for an enabling environment, coming in 88th for its regulatory landscape. At the same time, it came in 102nd globally, respectively, in its ability to attract talent and retain talent, 46th in growing talent (with formal education ranking 83rd), 63rd in Vocational & Technical Skills, and finally, 49th in the Global Knowledge Skills pillar.

On a whole, Thailand ranks 75th globally in talent competitiveness, with its ability to enable and to grow talent placing it in 62nd spot in each pillar, respectively.

Vietnam (74th) achieves its highest marks in the Enable (57th) pillar, where the intensity of competition, access to credit, and ICT infrastructure are key reasons for its conducive market landscape (41st). The country’s most impressive sub-pillar is employability (17th), but the associated pillar – Vocational & Technical Skills (65th) – is weakened by "disappointing" mid-level skills (100th), including a lack of technicians and associate professionals.

The dimension that checks Vienam’s overall talent competitiveness the most is its "poor ability" to retain (95th) talent, a weakness that stems primarily from the "negative impact of the dismal environmental record on sustainability (96th) and of the low level of personal rights on Lifestyle (87th)", per the findings.

The Index also ranked different cities around the world on their talent competitiveness. Overall, the top 10 cities identified are:

Meanwhile, these cities ranked as follows:

According to the study, while Hong Kong is not in the top 10 among the cities ranked this year, it still showcased "notable" performance on the Index. Along with Eindhoven, the Netherlands and Luxembourg, Hong Kong enjoys a "favourable" enabling environment (6th). In addition, Hong Kong and Luxembourg are "stellar performers" when it comes to attracting talent (8th and 1st, respectively), while Eindhoven has a strength in retaining talent (7th).