Despite an increase in retrenchments through 2020, after taking into account the increase in workforce size over the years, the incidence of retrenchment remained lower than all the past recessionary years.

According to the Ministry of Manpower (MOM)'s Labour Market Report Fourth Quarter 2020, released by the Manpower Research and Statistics Department on Tuesday (16 March 2021), fewer retrenchments were recorded in most industries, except in air transport & supporting services, which was still affected by global travel restrictions.

Other reasons cited for retrenchments in the year include:

Overall retrenchment figures for the year

A year-on-year comparison with 2019 figures 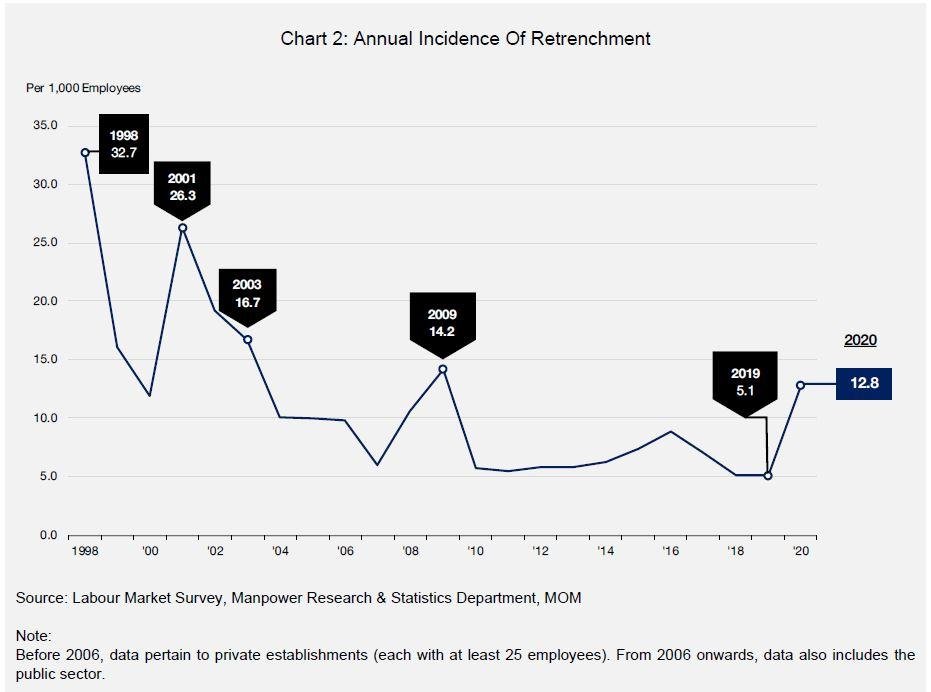 However, after taking into account the increase in workforce size over the years, the incidence of retrenchment (which measures the vulnerability of workers to retrenchment) was lower than all the past recessionary years. 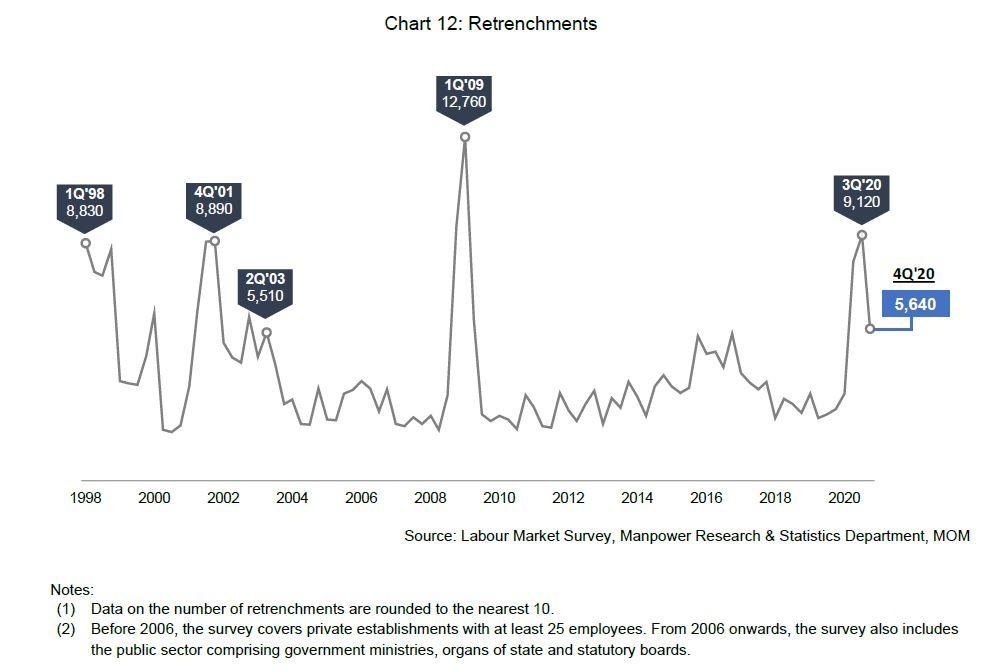 While the above was so, non-residents were more prone to retrenchment (15.7 retrenched per 1,000 non-resident employees) than residents (11.1) in 2020, similar to previous recessions. In particular, resident workers in air transport and arts, entertainment & recreation were harder hit by COVID-19 measures. 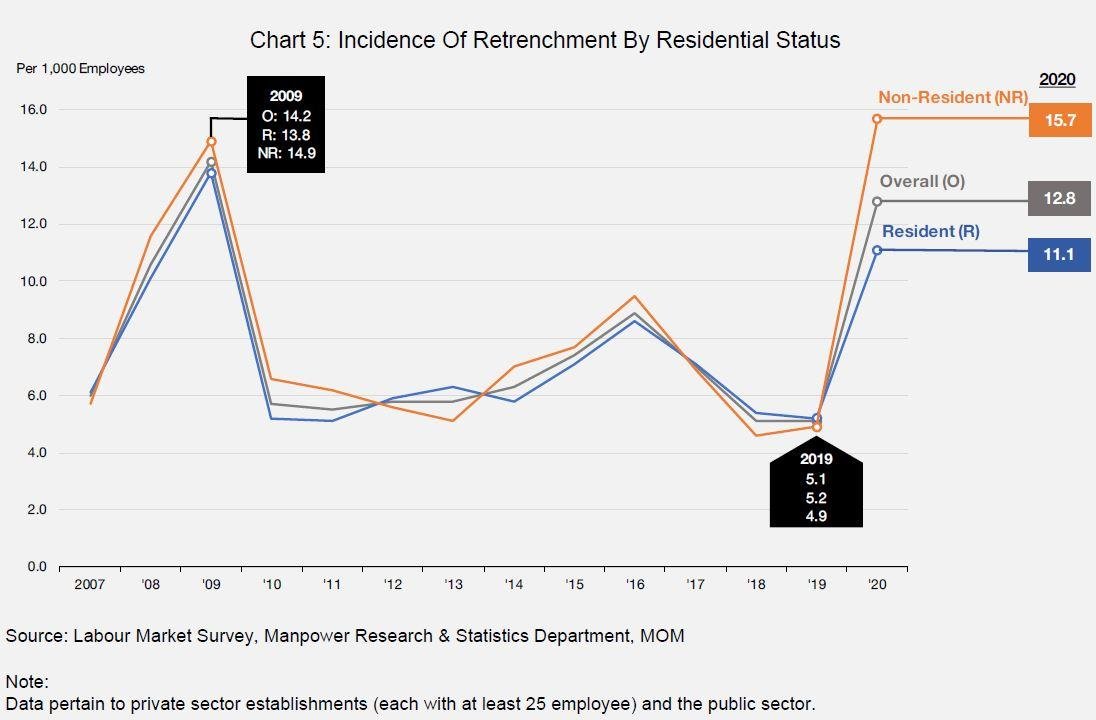 According to the report, in 2020, older residents in their 50s (15 retrenched per 1,000 employees) were most prone to retrenchment, as compared to other age groups.

While all age groups saw a "broad-based increase" in the incidence of retrenchment over the year, older residents aged 50 and above, as well as younger ones aged below 30, saw the largest increase (7.3 in 2020, vs 1.6 in 2019). In particular, younger residents aged below 30 observed a higher increase in the share of residents retrenched, as "disproportionately more" were in clerical, sales & service roles, which were more commonly found in industries affected by COVID-19 measures. 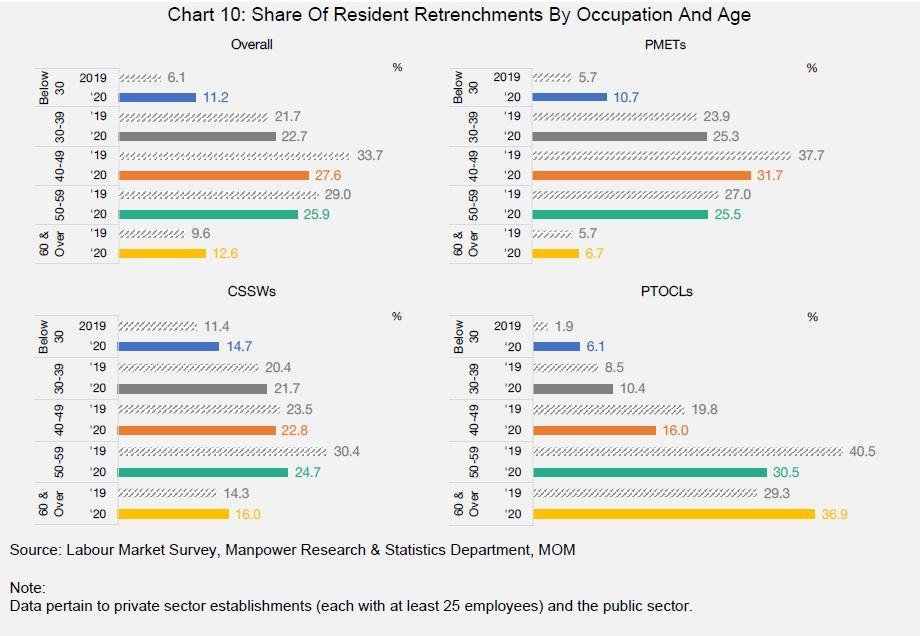 This, the report noted, was due to an increase in women residents being retrenched (from 45% to 50%) over the year, mainly in arts, entertainment & recreation and retail trade, industries which were more affected by COVID-19 measures and where women were over-represented. 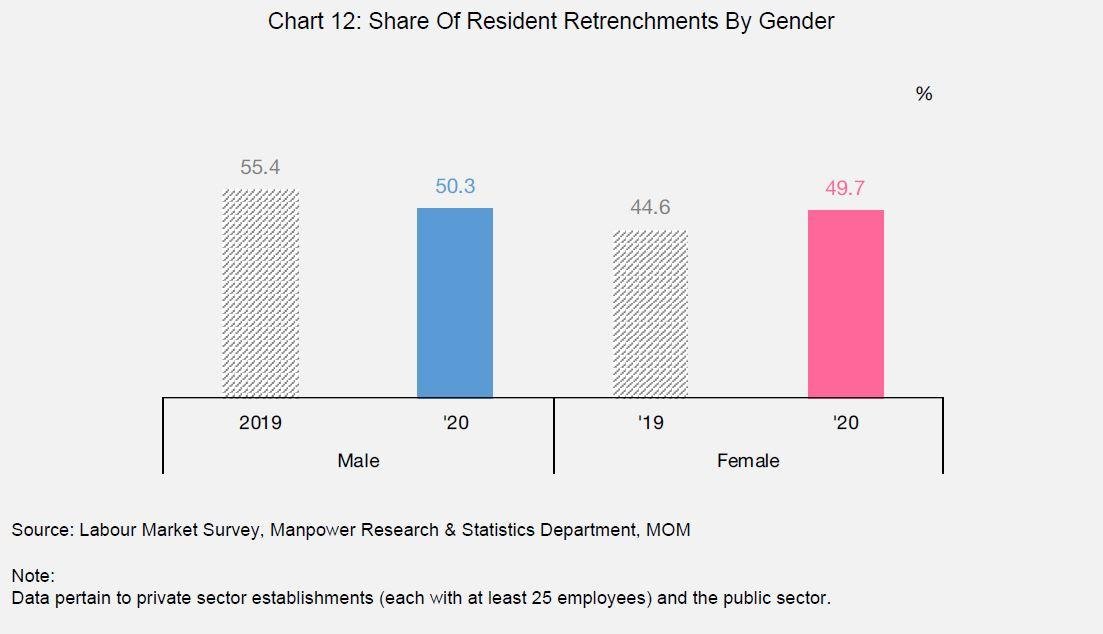 Further highlights of the report: Employment and unemployment figures

Further, the Employment Diffusion Index (EDI) for residents held steady over the quarter at 64.3 in the quarter, indicating that increases in resident employment was "broad-based across industries". On the other hand, it remained "markedly below" the mid-point of 50 for non-residents (16.3), indicating that most industries experienced a decline in non-resident employment.

The resident unemployment rate recorded in this period was also lower than in September 2020 (4.8%), and this decline was broad-based across most age and education groups.

Lastly, in January 2021, unemployment rates continued to decline slightly at the overall level (3.2%) and for residents (4.3%). It remained unchanged for citizens (4.5%).

Commenting on the highlights in a Facebook post, Manpower Minister Josephine Teo noted despite a "broad improvement" in the labour market in Q4 2020, "we cannot underestimate the risks that lie in the months ahead."

"We are not yet opening our borders fully, and for an externally-connected economy like ours, this will continue to weigh on our economy, especially in the aviation and hospitality sectors. With changes to industries brought about by COVID-19, jobs-skills mismatches will also continue to be an issue that we will need to tackle.

"Looking ahead, our priority must be to ensure that employers and every segment of the workforce emerge stronger from this pandemic. We will continue our efforts to help workers upskill, find their career progression path and match them to good jobs though government programmes such as the #SGUnited Jobs and Skills Package. For employers, we will support them in their business transformation efforts."

Similarly, in a separate Facebook post, NTUC Assistant Secretary-General, Patrick Tay pointed out that moving ahead, Tier 1 companies will "continue to be facing downside and retrenchment risks with slow and incremental opening of travel arrangements between countries as well as gradual curtailment of government subvention through the JSS."

He also highlighted that reskilling and second skilling "will be an imperative" to ensure workers stay employed and employable.

"Employers need to support and be alongside workers/unions in this continuous education/lifelong learning journey."

Human Resources Online is on Telegram! Follow us @humanresourcesonline or click here for all the latest weekly HR and manpower news from around the region