As a start, identify which roles are declining and which are growing in demand; then look at the skill sets that closely match both roles.

The pace of digital transformation in today’s workplaces has seen more employers hiring for talent in digital roles, while also seeking to upskill their current workforce to keep up with the changes it has brought about to their roles.

In fact, research has shown that the demand for typical digital skills has spread across different occupations and sectors "faster than for other skills over the past decade", according to a new report by the Organization for Economic Co-operation and Development (OECD) and Randstad.

This means occupations that only a few years ago were not using digital tools or requiring digital skills, are now becoming increasingly digitised. In line with that, the report showcased the following five most in-demand digital skills in the job market:

Cybersecurity
With cyberattacks becoming a more pressing issue and risk to the workplace, employers are now investing greater in both security and risk management resources. As a result, more are hiring workers with cybersecurity skills.

Programming
Per the report, programming skills have also been seeing high demands in recent times, as they "play a key role in a variety of fast-growing job categories."

Automation and the Internet of Things (IoT)
Skills related to automation and the IoT are diffusing as much as six quicker on average than demand for other skills, fueled by the growing popularity of products for smart homes, and smart wearables such as watches, it was highlighted in the findings. The pace has been especially quick in the UK and US, happening six to seven times faster than the average skill, respectively.

Digital skills related to business and sales
With digital technologies in use in nearly all productive sectors of the economy, there are rising needs for a range of related skills. In that vein, the demand for digital skills connected to business and sales has spread across different jobs 8.5 times faster than the average, with the strongest growth in social media skills. Additionally, the diffusion of programming skills demands was up eight times faster than the average, while that for IT automation skills increased six times faster.

Keeping the above in mind, the report revealed a few steps employers can consider taking to help their employees in less in-demand roles move and thrive in new roles.

It starts with using big data to identify declining and thriving roles in the organisation. For instance, employers can look at data sets available in national labour reports & statistics, which showcase any expected decline or growth in job types.

Next, employers can analyse and identify any similarities between the roles. By looking at the skill sets in different roles, the report elaborated, employers can see which positions offer the closest match. Taking the example of advertising sales agents (declining) and digital marketing specialists (thriving) in the US:

Based on the OECD's calculations, there is a high degree of skill overlap between advertising sales agents and digital marketing specialists, as seen in the charts below: 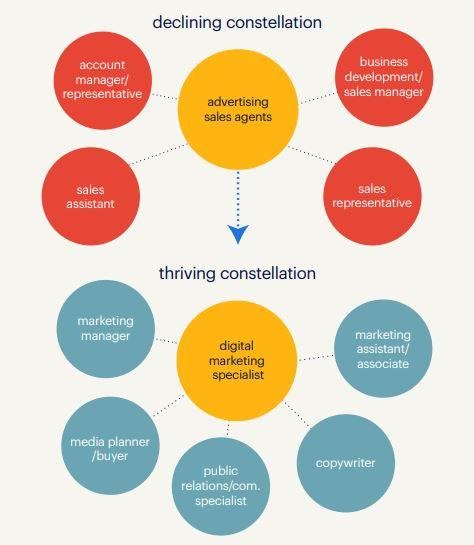 Third, employers can work on offering the team a clear retraining plan to transition into new roles. While doing so, employers should ensure they offer transparent, data-led training plans to fill any knowledge gaps. For example, looking at the two roles mentioned above, data in the report noted that an advertising sales agent would need to boost their knowledge of web analytics and online marketing in order to transition to a digital marketing role. The final step is to support employees in their transition to their new roles. Understandably, changing professions, even within the same organisation, can be challenging. Thus, employers are advised to offer these transitioning team members the same support as they would to new joiners, with induction processes, regular check-ins with line managers, and introductions to their new colleagues to help them to settle in faster.

The new report from the OECD, in partnership with Randstad, aims to provide business leaders with essential information.

It is based on an analysis of 417mn online job postings over a period of 10 years in 10 countries: Belgium, Canada, France, Italy, Germany, the Netherlands, Singapore, Spain, the United Kingdom, and the United States, covering four broad categories of digital occupations: computer and data analysts and administrators; software developers, programmers and engineers; ICT technicians and data-entry clerks, and ICT and HR managers and marketing specialists.

While the data is based on the above markets, HRO believes it remains relevant to all readers in the region.